A few weeks ago, Nandi Rose Plunkett of Half Waif & Pinegrove posted this message on twitter. Being a female in the music industry is still not as easy as it should be. Yes, it’s 2017 and we still struggle with this kind of bullshit.
We met Nandi before Pinegrove’s show in Edinburgh and talked about exactly that, new Half Waif music and her favourite female artists.

Let’s start with an easy one… you’re on tour with your band Pinegrove at the moment – how is it going?
It’s going really well. It’s been super fun. We had four shows in England, we played an outdoor show in London and then we had three shows that were part of Dot to Dot Festival – it’s a traveling festival – in Manchester, Bristol and Nottingham. They were all really fun. It’s a different experience playing festivals, because you don’t have a soundcheck, you just get there, a bunch of people just loaded in for you… so it’s actually been a few really chill nights for us.

I saw the tweet you posted – can you tell me a bit about it?
So I was at my grandmother’s house with my boyfriend, before the tour started. And we hung out with granny, and she really wanted to see some videos of Pinegrove… so I pulled up the NPR Tiny Desk concert that we did and showed it to her. She was really enjoying it. And then I scrolled down to the comments, which I hadn’t seen yet, and one of the comments was something like “the girl is beautiful and has a nice voice, but she doesn’t do anything for the band.” I saw that and my blood froze. That comment is one that I’ve seen before – calling me “the girl”. And it’s one that really touches a nerve, because I often worry that as a woman in a 6-person band, people take me less seriously and won’t think that I’m as talented as my bandmates. And I work really hard. I’m singing, I play keyboard and percussion – often I’m doing all three at once – and still I feel like I have to prove myself all the time. So then just seeing this comment which is articulating this already deep fear in me just… crushed me. I was so upset. I felt like I had to write about it, because I didn’t know what else to do. I didn’t want all these emotions inside of me and so I very quickly just kind of wrote this rant and I showed it to Zack and just asked him “Is this okay?” and I posted it. I really had no idea what kind of response it would get, because this isn’t anything new, is it? Women in so many different fields – not just music – experience this kind of treatment, but I got so many likes and retweets and responses. People from my childhood were sending me messages. I got a lot of supportive messages. A lot of them were saying “You know, we feel a little differently, you do so much for this band”, which was so nice to hear. But the ones that made me feel the best were the messages that said something like “Thank you for saying something, for standing up for yourself and for other women.” ‘Cause we don’t talk about it a lot.

Exactly, and it should be talked about more.
Yeah right? Even though it happens all the time. The comments that actually surprised me the most were from a few people who messaged me and said “I’m so sorry this happens to you. I had no idea.” I was like: “This isn’t the first time.” This was the first time I was speaking up about it, but there were countless incidents that had happened when I didn’t say anything about it, when I didn’t post about it. I maybe mentioned it to my bandmates. It happens all the time and I think a lot of people don’t realize that. It’s just a gender and it’s such an issue – still! What year is it? 2017! It makes me really sad when I think about how far women have come, but also how much progress has to be made, because sexism is so deeply ingrained in our culture. We have so much work to do and that can feel really overwhelming, but I think the first thing we can do is just talk about it. My bandmates are really great guys and they would never make those comments. They are shocked. They can’t believe this is happening to me right in front of them. They won’t even notice. You know after a show I’ll be standing next to Zack and a young man will come up, look at Zack and be like: “Oh my gosh! I love you so much! You’re my favourite band, thank you for your performance, I love you guys!” and I’m standing right there and they won’t even look at me. I have just performed alongside these guys for an hour, I did as much as they did and they won’t even look at me. But that’s what makes it difficult to talk about – that it’s not always that explicite. It’s not always someone saying a really sexist thing. It’s just small things that are going on – the body language, the context and that makes it hard to talk about it.

Have you spoken to other female artists about it?
I have yeah. I love sitting down with other women, because there’s just this inherit understanding we have – we have to go through this. But I don’t think I talked enough to other women. I think because I have five male bandmates, our tour manager is a man… I spend a lot of time with men in this industry. Often when you’re playing shows there will be three bands and there won’t be another woman – or there’s one. For Dot to Dot we shared our bill with Cherry Glazerr and The Big Moon. And Cherry Glazerr was the best band for me to watch after making this post, because the lead singer is a woman, the keyboarder is a woman, and their energy is so intense. Almost like throwing it back into the faces of the people who doubt them. It feels very triumphant, very in-your-face, every exciting to watch. And with Big Moon it’s kinda the same. Four women – totally doing their thing, not taking shit from anyone, very strong, having a great time – just like really good role models. And that’s been a really great thing for me to hear after making this post. That’s what keeps me going a lot of times, when other women say things like: “It was so good to see you on stage.” Or girls who come up to you and say something like “I was watching you cause I wanna be a musician too and you make me feel I can do it”. And you have to put up with a lot of bullshit to do that. It’s not easy and sometimes I don’t wanna do it and I’m like “Why do I put myself on a stage?”, because sometimes I don’t wanna make myself visible. I would rather just make myself small and invisible, but we’re not gonna achieve anything if we just hide, if me make ourselves small like so many women in the past did. Living a domestic life, feeling like they can’t do their own thing and be their own person. We can’t regress back into that. We have to keep pushing forward and make ourselves bigger and be brave.

I talked to Aurora about this. She’s the lead singer and she told me that when she’s soundchecking the sound techs always ask the male members in her band how she’d like to sound.
I love Aurora, she is amazing!! And that’s just insane. She’s the star, it’s her profession. That’s crazy – when professionals still are doubted. This is what I do for a job, I don’t have any other job. That’s what I do every day. It happens all the time and I think we almost get tired of talking about it, because it’s so common, but we can’t stop talking about it. We can’t stop just because it’s getting boring to hear these stories. We have to listen. I would like to give this man, who made the comment, the benefit of doubt, because he followed up “She’s beautiful and has a nice voice, but doesn’t do anything for the band.” with “It’s just my opinion.” He probably really thought he was just making an opinion, not understanding the context. Maybe he didn’t understand that what he was saying is deeply hurtful and implicates him in a long line of sexism. Maybe he didn’t get it. So we have to educate these people, we have to look them in the eyes, take them by the hand and say: “Look, this is really hurtful. This is not okay and this is why…” I really hope, if we just keep this discourse going in a very active way, we can make a change. I mean in all industries, not just music, pretty much everywhere.

You have an amazing solo project – do you have any news for us about Half Waif?
Yes! I’m really excited for Half Waif to tour for a month, we do two and a half weeks of opening for Land of Talk. They just brought out a new record after seven years, it’s so stunning and I’m really excited to share the stage with them. The lead singer is Elizabeth Powell, who is a brilliant songwriter and a really powerful presence. And then we’re opening for Mitski who is another incredible songwriter and inspiring woman to me. I followed her music for years now and always wanted to meet her. So both of these tours are gonna be really fun for us.
And in the meantime we’re also working on a new record. It’ll be the longest record we’ve done – we have like 14 songs which will probably narrow down to 11. I really wanna tell a story with this one. It’s about travelling, aging… and my grandmother is in a couple of songs!

Ah that’s so cool! I really love Half Waif. And Pinegrove. You seem to be involved in good stuff only.
Ha, thank you so much! I really love being in two bands. They are really different musically, I get to explore different parts of my musical-self. In Half Waif I am the lead, I write the songs and I lead the band – it’s my vision. In Pinegrove it’s all Evan’s songs – and I believe so fully in them. It’s really exciting to be a part of something that is not my own vision. I think it’s a good and healthy thing for everyone to do: leading on something, and following something.

And the last one – can you name three female artists that you really love at the moment?
Land of Talk – her melodies are really unique.
Feist – because she just put out a new record and I admire her so much. I feel like she is a really real person who is exploring her art in very cool ways.
Weyes Blood – I got to open for her in San Francisco a few months ago, which was incredible. She has a very unique voice and her style has some 70s folk vibes. She is just one of the best live singers I’ve ever heard. 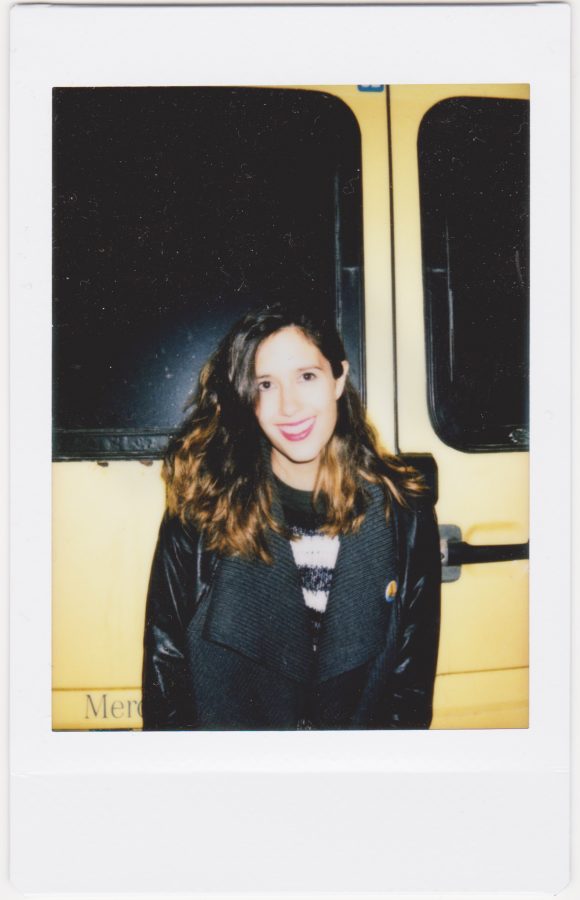