We met Filou from Abby for an interview last week! Nice guys, and a great live band, check out their song ‘Evelyn’ right here!

How did you start with music?
I think every single one of us started with music really early. At our music school we all learned to play those classic instuments, like piano, and then every one of us went on with music differently, first.
Lorenzo, our keyboarder, did some cool DJ jobs before. Phillip played at an orchestra first, then learned how to play the guitar, and played with a few metal bands as well.
Henne used to play Reggae once.
I started to play the piano first, then I got more into classical vocals. I played with metal bands as well haha!
After some time I realized that it’s fun to write songs, and for us all it was pretty clear that we wanna do music.

Have you got a dream venue to play?
I think we got some dream festivals to play at, but clubs or venues itself.. Royal Albert Hall in London would be fantastic, that’s a big dream. It’s so beautiful.

Which musicians inspire you guys most, and have you got one you’d like to work with?
Lots of old stuff inspires us, Led Zepplin, Nirvana but as well Radiohead or DJ Koze, he’s such a cool guy.
I’d love to work with Thom York, or another member of Radiohead , doesnt matter who. But there are lot’s of inspiring artists we’d like to work with.

Have you got a ‘plan’ how to write your songs?
Not really no, but we do everything together. Sometimes someone has got an idea, but we always work on it together. And I think that’s really important.
But we’re always searching for new ways to write, new inspirations. Maybe we gonna write the new album just at our jams. We’re working with a DJ at the moment as well, so we’ll see what’s gonna happen in the near future.

What do you think will happen next year?
Next year it would be cool to release our second album worldwide! That would be great. We gonna do an European Tour for sure, and we’d love to play bigger venues as well..So maybe about about 800 people, that are some goals we got for next year.

Have you got an advice for young musicians who are just about to start with music?
Yes, have fun, that’s the most important thing! And if you want to do it as your job, make sure music is the only thing you wanna do. It’s a big risk.
Also, music is hard work sometimes. It’s not to stay in bed till 3PM and maybe, if you found some inspiration once a month, to pick up your guitar and do a little song. You should really work, and you have to really want it.
If you do it just as a hobby, just do whatever you want, play loud, and have lots of fun! 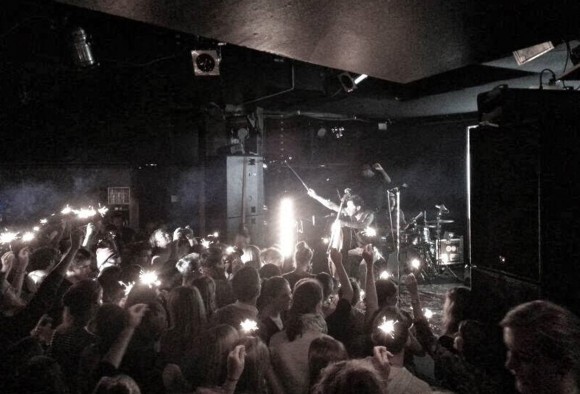