So you guys are finally back in Germany! Do you have a favourite city here?
Matt: Actually not, no, cause I think they are all pretty amazing! Each in its own way. We’ve only really been to Berlin actually, but Munich seems absolutely amazing.
Leo: We love Berlin a lot, but we haven’t really explored Germany enough to be able to make a proper desicion on which is the best city. But so far I really really love Munich. It’s so much… cleaner than Berlin, haha!

Your debut album is finally out and it’s got pretty good reviews. Is that something you care about? Like, what the press says?
Matt: Not really, but I would be lying if I said I don’t read them. I’ve read a few and they were all quite nice. It’s lovely to get a little recognition from the press, it doesn’t hurt, but as long as the fans like the music… that’s what makes us the happiest.
Leo: Yeah exactly, that’s the most important part. I didn’t read too many reviews actually. As soon as the album came out we were more excited about playing the songs live, you know, cause we couldn’t really do that before the album dropped. So the shows and seeing the people’s responses at our shows was the best feeling ever. Better than press recognition.

Could you pick one song on the album you connect most with?
Matt: Mine is ‘Live Well’. I just really love it.
Leo: Mine is ‘So Long Forever’, the title track.
Will: I would probably say ‘So Long Forever’ as well. It has so much energy and it’s great to play live. That one and ‘Holy Smoke’, which is a nice and kinda personal one.

I feel like from the very beginning people noticed you and were really interested in your music. When was the first time you actually realised ‘Ok this band is going somewhere’?
Leo: Yeah, actually that happened really quickly. We started playing just for fun, once a week we were just getting together and playing in a sweaty rehearsal room, for fun. And then we put some songs online and we found an agent really quickly. And as soon as we had our agent it all happened rather fast. So I guess that we realised it was quite serious very early, ha. But that was a good thing.

You spend lots of time on the road – what do you do to kill the time on the tourbus?
Matt: SLEEP. We sleep a lot, like really.
Will: We mess around, we play football at petrol stations, read, watch some stuff…

What’s your favourite album that was released in 2017?
Matt: Angel Olsen’s new album.
Leo: Mystery Jets – ‘Curve Of The Earth’.

You guys also support lots of new music, right? You have your own event – ‘Palace Presents’ – that’s happening in London sometimes. How did you come up with that idea? Can you tell us a litte bit about it?
Matt: There is this venue called The George’s Tavern, this 600 year old pub, and we used to play lots of shows there cause our friend used to run a night there. And we loved the venue, and when our friend stopped, we kinda took it on. The idea just came up and it’s really amazing. It gives new bands the opportunity to play and it’s great fun. Also the pub itself is under so much pressure at the moment since they are building so many flats around it, so it might shut down… which means it’s also good to give a bit of an exposure to the pub. But yeah, it’s great. We’ve had lots of cool bands on!

Any new bands you’d like to recommend?
Leo: I’d say Foxygen are definitely one to recommend. They are really cool. Also The Lemon Twigs!
Matt: Island! They are supporting us at the moment.
Leo: What’s that other band you love? King Gizzard & The Lizard Wizard!

You played with Hugh Harris from The Kooks a couple of times, didn’t you? How did that come together?
Leo: Yeah! How do you know that??

I could say I did some deep research but the truth is I am a twitter creep and read his tweets in 2014, so that’s actually how I know you guys.
Leo: Woah that’s so cool! Well yeah he played with us for a bit, he played bass before Will joined. He’s an old family friend of mine, so I’ve known him sice I was 16 or 17. He has always loved our band and we were looking for someone on the bass and he was off tour for like 9 months. So he was like ‘Can I join?’ and we were like…’Uhm… yes?’. So he went from playing huge venues to loading amps into 100 people venues – but he loved it! He also helped us write ‘Bitter’. He’s awesome. And such a big and nice supporter of our band.

Excuse me? You what??
Leo: Yeah! I was a extra in Harry Potter 4, I was one of the kids running away from the deatheaters at the Quiddich World cup. That was fun, I stole lots of stuff from the set, ha! 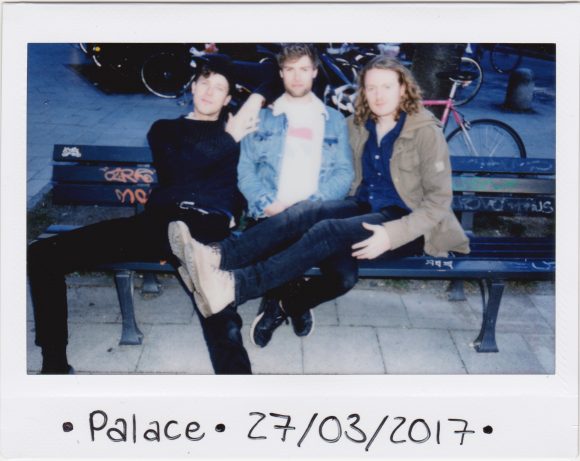