In August I met Vern Asbury for an interview in Brighton. His brand new album ‘Fanfare’ is out now! Just send him a message at his facebook page to order your copy.

How would you describe your music?
I would say that it’s always melodic, whatever I do and I always try to make it soulful and try to make it connect with people musically and lyrically, I guess to evoke an emotional response. That’s how I’d describe it, but in terms of the actual components of how it sounds at the moment, the music I make mainly involves guitars. I guess it’s ‘guitar driven pop’, maybe a bit of Indie in there, or Indie Rock. I mean I do also sorts of things outside of my current project musically, so I sometimes make dance music, sometimes my music gets a lot heavier and sometimes I strip it back so it’s just acoustic guitar and vocal. Sometimes I even beatbox! But at the moment, what I’m trying to do is to make a collection of songs that are soulful, melodic, emotional… big sounding pieces of ‘guitar music’.

How did you start with music and when?
Well, I first started learning guitar when I was nine years old, so a long time ago now. But in terms of making my own music I started when a good friend of my dad – he was a musician and he had some success in the seventies and in the eighties over here – lent me and my brother a very old four track machine, which was like an upright, massive piece of equipment. It used tape cassettes. That’s when I began to experiment in using it. So you know, probably at the age of fourteen or maybe fifteen I started to record myself and then used different layers over the top and I think that has been the most important step for me in making my own music. It’s the ability to hear something you’ve done, hear what you don’t like or what you do like about it and then give yourself the freedom to develop other layers over the top. So over the core idea, adding an extra guitar part or your vocals or a bass part or a drum beat. Coming back to your question, I’d say around fifteen was the first time I started to properly make music!

Are there any special topics you like to write about?
I mean, I’ve been writing music since I was about fifteen. When you are younger, you tend to try and write about things that you think make you look older. You try to ‘look cool’ and come across as ‘mature’. But it’s not really writing from experience of real life or honest places, just putting words together that you think sound right, you know. Without really having any meaning behind them. If you’re writing songs at a very young age and you write songs about what’s really happening at the time, you’d probably write about playing football with your mates in the park – certainly that’s honest, but not very interesting to listen to! Nower days most of my writing is a mixture between two things: either it’s personal experiences of stuff that I go through in my own life, or it’s observations about things that are going on around me or perhaps looking at another person’s situation.

And then, you know, having poetic license, or maybe running off with a ficitious idea or story that I create. For example: I wrote this one song where I talk about a guy I once noticed in Brighton. I was playing one of these machines where you put the coin in and you’ve got the thing that goes like this [pushes] and it pushes the coin over the edge and you collect it. So I was just playing this game one day a few years back with a friend of mine, and there was this guy standing there, watching every single movement that we made, as if his life depended on it. As soon as we moved away from the machine, he went and played it like as if he was calculating how to earn some money. Me and my friend found this very strange, because the most you could make from this would have been like ten or twenty pence, but this vulture-like character made me really think. So I wrote a story about him and I made up a life that he had lived and how he’d ended up going to jail because he killed a guy who was having an affair with his wife. And then he came out of jail and ended up as this sort of weird, beaten up old man, beaten up mentally I mean. He ends up, standing on Brighton pier playing these games. So occasionally, it will be a story that I imagine about someone else but, that’s when I get bored of being narcistic and writing stuff like, “Oh, hey, look at me! I’m in love or I’m having some kind of problem emotionally!” It’s nice to write about that and maybe even for people to listen to, but it certainly gets boring to write about eventually, so I’m sure it is to listen to also! So you end up writing about different things… 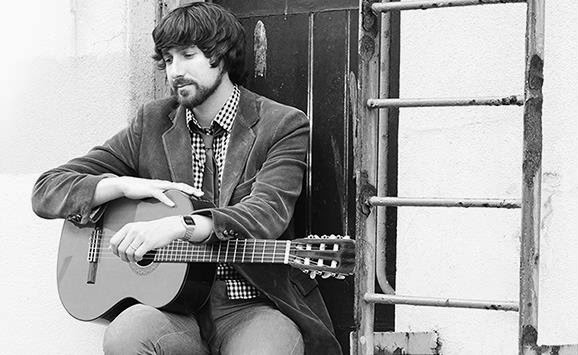 Tell us a bit about your upcoming album..
The upcoming album is called “Fanfare”. And “Fanfare” is like, sort of an old fashioned milatary parade – like you see the guards of Buckingham Palace playing brass instruments and playing marching bands songs, so that’s the idea behind the name of the album and it’s also a play on words because sounds a bit like “funfair”, which is obviously something quite different to “funfair”. In the artwork I’ve got a picture of the big wheel in Brighton, where I live, and have added in some images of marching bands, so that visually ties it all up I suppose.. So in terms of there being a theme, it’s all about, I guess a kind of a ‘celebration’, generally speaking. A lot of the album is quite upbeat, at least the music is. Some of the lyrics are maybe quite introspective at times and maybe quite sort of, not depressing, but kind of like heartfelt, coming back to my good ol’ narcisism! But the general feeling, I hope, is that you’re left with a feeling of celebration and feeling quite upbeat.

It’s a collection of songs that I’ve written over the last four years. Some songs which you already know actually Lisa, (there are four songs on there which I borrowed from previous compilations that I’ve recorded a little while back) but, of course, no one in the big wide world has heard them, so for a lot of people this will be the first time they’re hearing the music. I wanted to create an album that’s stylistically consistent and had songs that marry with each other. I actually left off quite a lot of songs which are my personal favorites, because I don’t think stylistically they go very well together. I’ve used very different production on some of the ones I left out and some of them would be very, very heavy, (there’s a big place in my heart for ‘meat’), but the album wouldn’t have sat right with any of that stuff in there. I did it all at home. I’ve played all of the instruments on it and produced it, so it’s a genuine ‘piece of me’. And I’m excited about it, excited about releasing it.

Was it always your dream to make music?
Absolutely. There’s not been anything else in my life so far that I’ve felt completely naturally with. This is what I want to do. And I think a lot of musicians say the same thing. I guess at the moment I’m not lucky enough, (I mean I’m very lucky in life and in good health), but in terms of my career I haven’t been lucky enough to make this my fulltime job and that’s the next step for me. I want to be able to make music and do that fulltime and not have to worry about bringing in money for the bills. I haven’t given up the dayjob yet! It’s always been my dream to make music and I’m lucky enough to get to do that all the time. And actually, I think I would continue to make music even if I wasn’t trying to make a career from it, because I need to do it to make sense of everything, to keep myself sane. If I didn’t do it, I don’t know what I would do. Maybe I’d play a lot more snooker! 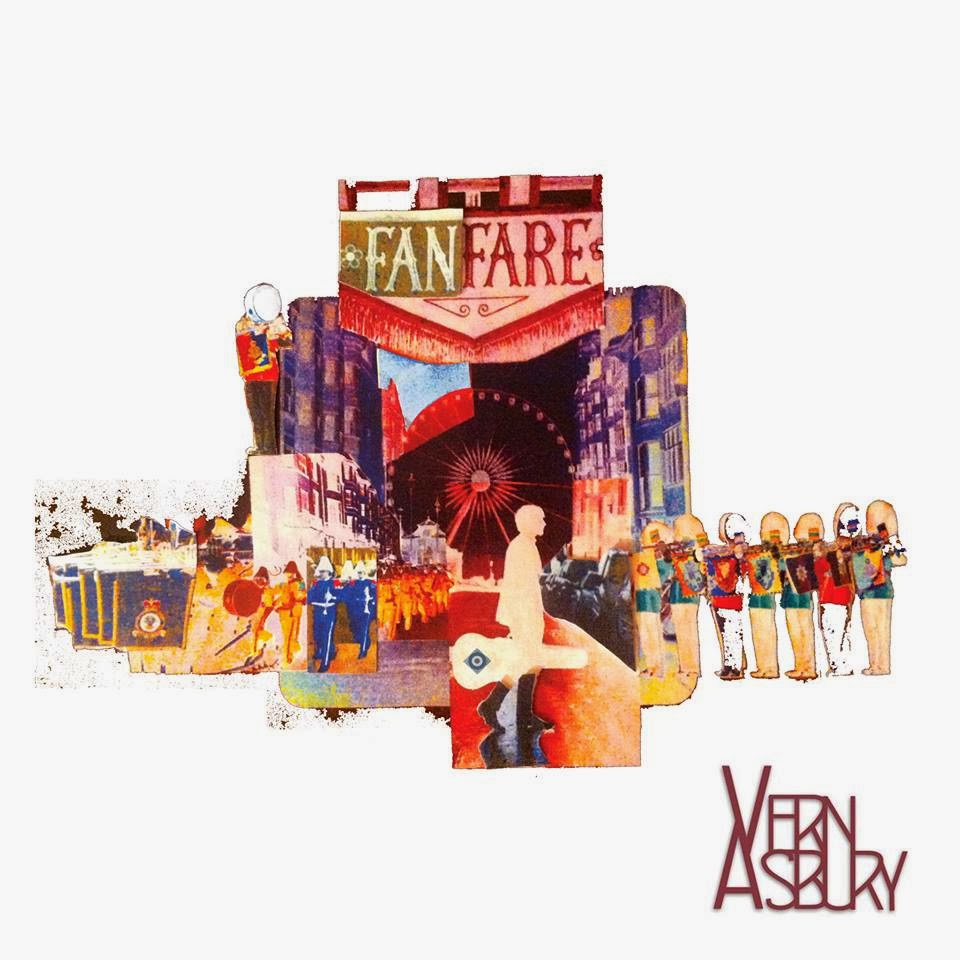 Are there any musicians who inspired you a lot?
Yes, many. Most of all it would be when I grew up with a lot of music from my childhood. My parents both where quite heavily into some quite cool music, so I was quite lucky, really, so I always had lots of music playing at home. My earliest memory is listening to “The Who”. In fact my earliest musical memory wasn’t a conscious one, as I was in my mother’s belly at a “Who”concert. So you could say that I had no choice but to become a “Who” fan. They’ve played a big, significant part in why I ever wanted to pick up a guitar, but it’s not all about “The Who” for me. Several musicians have really done it for me over the years. Jeff Buckley, I was lucky enough to see him when I was fifteen and I don’t think there’s any musician who’s blown me away as much seeing them live, as he did. I mean, obviously the most incredible voice, but also his guitar playing was just on a different level. It blew my mind, still does, thinking about it. John Martyn, I mean I’m sort of going back quite a while really, but John Martyn was a fantastic folk singer and guitarist. Definitely The Beatles. I mean it took me a while to get into them, but I don’t think that anyone could really question The Beatles. I have to say that they are in my opinion, and seemingly most of people’s opinion, the greatest band of all time. And I think they would for me hold that place, although I’d say the best live band of all time would be The Who, maybe second place Led Zeppelin. I guess the common thing for me is guitars and good songs. If it’s got those two things in it, then generally, I like it. Listening to new music all the time, there’s a lot of stuff in Brighton, a lot of homegrown music here that people never really get to hear about, that’s mindblowingly good. A band called “The Miserable Rich” for example, there’s a lot of amazing talent right here in Brighton. Obviously being guitarist for Max Rafferty (ex-Kook), The Kooks came from here. So it seems to be, there’s a lot going on here and I’m very lucky to be in such a creative place and I think that’s why I’ve chosen to make Brighton my home. It’s great.