Last Monday we had the pleasure to meet and interview Lisa’s personal biggest inspiration, Kate Nash! This lovely lady is currently on Tour with her new Album ‘Girl Talk’! Check out her new Video for her Single ‘OMyGod’ here. Her new single ‘Fri-end?’ will be out October 25, so stay tuned!

So first, how’s the tour going so far?
It’s going really well, we’ve got The Tuts on tour with us and it’s so much fun. We’ve played in Amsterdam and Brussles, then we went to the Reeperbahn Festival in Hamburg, which was really fun as well. Yeah it’s been going really good. It’s always good when you got a band like The Tuts with you, cause they just keep all the energy really high and it’s just lots of fun. We played with Fake Club as well in Berlin, because it’s my old guitarists band and it just happened that they were in town for the same day as us so we asked them to open. We had three girl bands at one night, it’s been crazy!

You’ve been touring all around the world, have you noticed any differences between the audiences at your show?
Yeah there are massive differences in each country and even at towns you get different responses from people, so yeah it’s really different. I mean we’ve played like all over the world, from like slovakia to brasil to chicago to the UK and germany, we have really done a lot this year, so I had a lot of interesting experiences.

Which musicians inspire you most?
Oh my gosh, I’m really obsessed with Mac Demarco at the minute, he’s from canada and he’s just so clever and funny, and kind of goofy and sings about his girlfriend or mum and stuff. His music is really interesting to listen to, he is kind of the artist which is inspiring me the most at the moment.
And then I always tend like the same kind of things like, you know, i love 60s girl groups, always loved them, i love 60s french pop.
I really like Kim Gordon, she has got a new project. I like grimes, I think she’s really cool.
HAIM, I’m interested in their new album and I think they are really fun. I like that they are a girl band who is really musical but as well fun and stuff in their videos, so that can inspire lots of girls, so yeah, lots of different people.

Lots of your songs gonna be used for a new brodway musical,how do you feel about that?
It’s SO cool! Andy, who’s the director and choreographer came to me about 3 years ago and had the idea. It was funny cause i was reading ‘Valley of the dolls’ at the time and the story really relates to that. It relates to both our personal lifes in very different ways. I love the story, and musicals are just so much fun.
I love them cause they are so open with emotions. I’ve been inspired my musicals like ‘The Muppets’ and ‘Book of Mormon’, there is some really good quality stuff out there. Musicals make you feel very happy so yeah, it’s cool!

If you could choose any artist to work with, who would it be?
Oh i dont know, that’s really hard! At the minute probably Mac Demarco, and then maybe someone like Prince, Stevie Wonder or maybe Patti Smith, she’s so cool!

If you didn’t make music, what would you be doing now?
Oh I think I’d still be making music, but in a diffent way you know.. I’m a really good waitress too..
I’d definitely be involved with creative things. There are lots of way I’d like being involved with, like creative industrys even if you’re not actually making the stuff so yeah, I’d find a way to do something creative.

What do you think about people who just come to your show to hear the old stuff, and are not even interested to see you perform your new songs?
Well I think maybe the old lyrics and stuff got really used to them, and yeah.. I mean now we re-worked some old tunes as well and got them into the set, and they sound really good and really different.
I think you should expect musicians to do different things and to surprise you, to change and to grow. But yes, of course you wanna see some of the classics as well.
I think the shows i’m doing right now are the best i’ve ever done, so i’m excited taking this around the world.

Have you got a favourite place to write your music?
Yes my rehearsal room in Bethnal Green. It’s called The Vatican, and it’s like under a railway and it’s got a leopard print bar, a labradoodle called peach, she’s so crazy, MTV classics is always playing and a guy called Oscar, he’s really so fun. I love it, I just go there and hang out, and I love it when you feel really private you know.

Do you like to visit any concerts in your free time?
Yeah I do, it’s funny cause I often just forget it cause I’m touring all of the time. And when I’m home I sometimes just can’t get myself to go out to any other gig, cause I’m like always there, but whenever I do I always realize ‘God I love doing this’. I think the last band I saw live was at a festival, FIDLAR, and they were really good.
Well it’s been a while, I’ve been so busy. But sometimes I make lists of people I wanna see, cause there are people i feel like I need to see before I die, from big popstars like Beyoncé, to Patti Smith and some others. I feel like maybe after this album campaign I’ll just spend some time going to lots of shows.

What do you like most at being on tour?
Maybe to be able to hang out with my friends, and play music with them, and all those silly thing that happen on the road. So being able to travel around the world with my friends is really amazing.
I also love meeting fans, and when I recognize people on twitter and then meet at a show, so I really get to know these people, its just amazing. I know lots of fans through the Internet and I think it’s a great way to bring artist and fans closer together.

Which advice would you give young artists who are just starting with music?
Just enjoy it, and don’t be too scared. Cause it’s quite scary sometimes to put your stuff out there. And dont try to perfect something too much, just put it out and move on to a new thing. That will help you to grow and to know what you really want. And maybe just do it, play shows, and if you’re like ‘Oh my god I’m not ready’, just book the show and you will be ready, cause you have to be. And then remember, it’s just music, so try to enjoy it, and play gigs where you will meet other musicians.
You will lean about the industry just my meeting poeple and you can only do that if you’re actually out there. 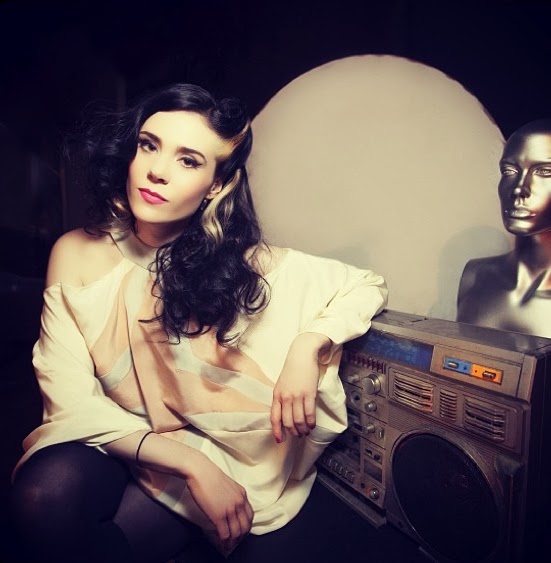 Why do you never play on the Surfcaster live?
Haha! Well because I got used to play my Epiphone, it’s so light, it weights like nothing. And then I got my SG Melody Maker, which is really light too, so for me its just better if the guitar doesnt weight very much. Maybe I should bring it on tour soon though, I actually love it, it’s so cool. But I used it on the record!

What inspires you most when you’re writing?
Just what I’m feeling, things that happened to me, what I’m going through at the moment. Personal things, my friends and my relationships basically.

Who’s your favourite Destiny’s Child member?
Oh my god, Beyoncé to be honest. I saw Destiny’s Child play at Wembley arena on the survivor album tour, and it was so good!

Who or what do you miss most when you’re on Tour?
I miss my bunny rabbit, a lot. She’s so cute, and she gets so mad at me when I’m away for too long, I really miss her.

If you were an animal, which one would you be?
Oh that’s hard! There so many animals I would like to be. It would be cool to be a dog, I feel like they are the happiest animals, cause they actually just want to be loved and stoked and they are so excited by so simple things. And actually they just play, eat and sleep, so that would be really cool. But then I’d like to be a dolphin or a whale as well, in the ocean.
Or maybe a tiger in the jungle, or a gorilla! That would be awesome. 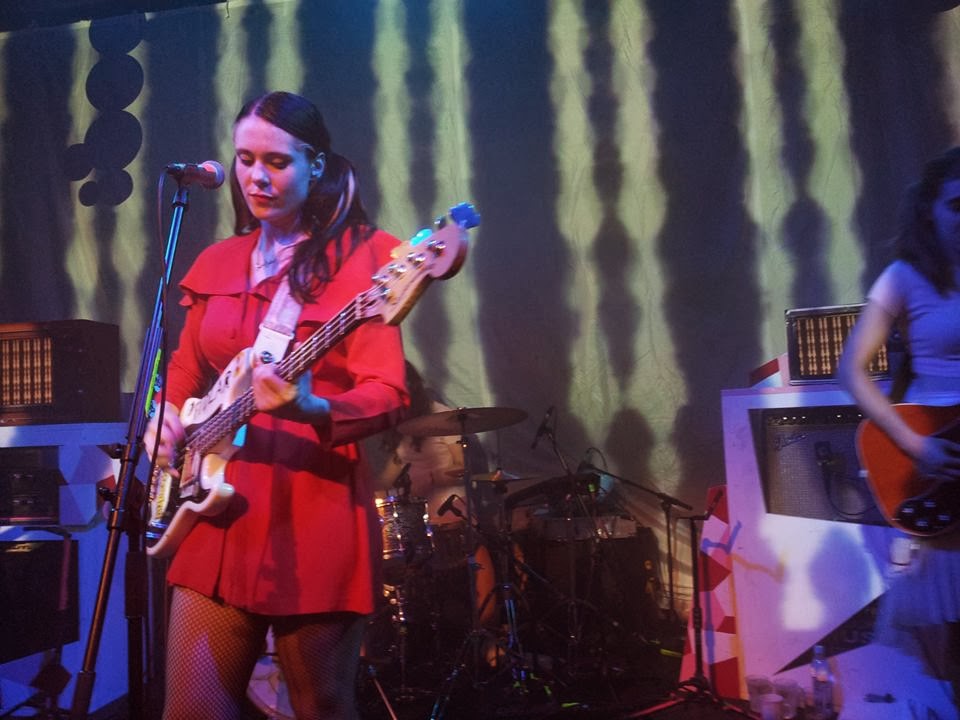 What’s your favourite movie?
Oh I got so many favourite movies, I love jurassic park, from my childhood, its one of my faveourite movies, I love it so much. But I’m a big movie fan so there are so many films I like. I love Kill Bill, and Kill Bill 2. I love Pulp Fiction and Death Proof, i love Tarantino so much. I like lots of Bruce Willis movies, and i like 80s movies. I love Knockep up, I think it’s a really good one to watch when you feel lovely or sad. And I like Super bad. Oh and of course I love My girl as well, it’s so sad, if you havnt seen that, you need to watch it! It’s a 90s movie.

What’s your favourite book?
Valley of the Dolls. It’s about all those sexual politics of three different women in the 60s, it’s quite sad as well but you really get addicted to all of the characters, and the story.

Why do you think The Tuts are a good support act for you?
Because the are so supportive as a support band. They watch your show every night, get the crowd really hyped and they are just very good. They are really loyal as friends too, they are always there for you. The Tuts are the best support band.

If you had to choose between the following three artists to work with, would it be HAIM, Marina and the Diamonds or Lana Del Rey?
Oh my God, maybe Marina. That would be cool. I think we could do something really interesting together, and she is really detailed at her work, I love that. Also lots of fans of Marina are mine too, so that would be really cool for the fans as well I think. 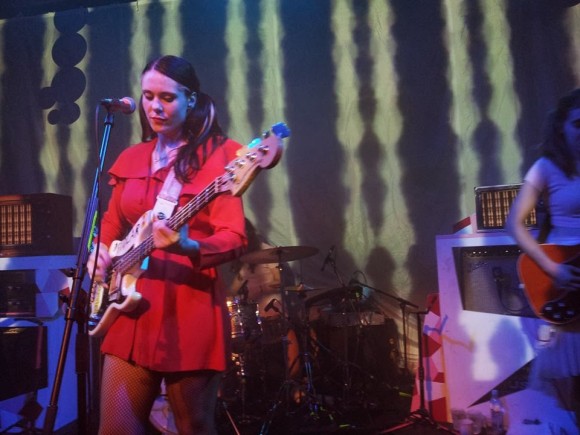