We finally met the girl punk band The Tuts for an interview in Munich! The british band is currently on tour with lovely Kate Nash, who we interviewed as well, so keep an eye out next few days!
Check their new video for their Song ‘Worry Warrior’ here!

First of all, how did you start with music?
Bev: Me and Nadia met at school.
Nadia: Yeah we met at school and we used to jump up and down to a band called Good Charlotte, Lifestyle of the Rich and Famous. And we also very much liked, and still do, this band called Feeder. And for my 15th birthday I asked my sister for a guitar, and she bought me a classical. I taught myself three tabs and asked other people at school how to read tabs and then Bev got lessons.
Bev: Yeah, we had lessons at school, and for my 16th birthday I got a drum kit. There was a girl at our school who knew how to play bass and so we started jamming.
Nadia: Yeah, we were learning our instruments at the same time as being in a band.
Bev: And then Harriet joined the band three years ago.
Harriet: ‘Cause I’m in another band called Color me Wednesday and we’re all from the same town where there’s not a really good music scene. But we liked each other’s bands, so we played gigs together. And then eventually their bassist left and I stood in for a bit, but then I stayed.

How would you describe your music?
All: BUBBLEGUM PUNK!
Harriet: The way I describe it is: it has the female Libertines style, but then it has that kind of 90s girl punk. Punky girl pop indie…bubblegum punk.

Which musicians inspire you most?
Nadia: The Libertines. But the obession has kinda died out a little bit because I discovered Kate Nash’s new album.
I don’t listen to that many bands, but yeah those, and Feeder.
Bev: Yeah, when we were 15 they were like the band. We wanted to sound like them. We wanted to be them.

Are you planning to record an album soon?
Harriet: We’re gonna do another EP first. Next year. We’ve got old and new songs that need to be sorted out for an album.
Nadia: If we do an album, I say we’ll just put everything on it.
Bev: Yeah, it’s gonna be like a yearbook.

What’s your dream venue to play at?
Nadia: Not any of the arenas. We’ve played at some of them already because of Kate Nash. What about Brixton Academy?
Bev: Yeah, Brixton Academy would be amazing. I’ve seen a lot of bands there and I kinda like the venue. It’s one of the big venues where – without a doubt – you can see the stage from wherever you’re standing.

How does it feel to be on tour with Kate Nash?
Bev: Amazing. It’s like the best thing ever. She’s the nicest.
Nadia: She’s our friend now.
Harriet: The first tour was really crazy, because we were still getting to know her. Now everyone knows each other so well.
Nadia: It’s amazing, because she pulls the crowds and yeah.. Now we kinda share fans haha! But also, even though she pulls the crowds and we share fans and it’s good exposure for us, also deep down we would like to do that as well. To headline a gig and be able to pull that many people.
Harriet: Yeah, and then have a band support us that aren’t as big and to the equivalent that Kate did for us. A girl band.

Where do you see yourself in five years’ time?
Nadia: Album. Headlining tours.
Harriet: Playing the festivals. At least two albums.
Nadia: Big fanbase.
Harriet: Playing America.
Bev: Yeah, playing America! There are just so many good girl bands in America that we know of and would like to play with.
Nadia: And just exploring more songs. Harriet and me, we’ve got so much more potential to write songs with each other. And I wanna get over 5,000 Twitter followers aswell haha!

What’s your favourite movie?
Nadia: Four weddings and a funeral. But also Ace Ventura.
Harriet: I’ve got so many favourite films, I’m just gonna pick the one that I’ve watched so many times. Scream. The first one. I just love it. I love the characters. I love scary films.
Bev: A Disney one. The Lion King. I used to watch it every single day, I was obsessed with that film. I knew all the words and the songs.

What’s your favourite book?
Nadia: Wuthering Heights. I like the interaction between the two generations and the different theories.
Harriet: You’ve got that from school?
Nadia: Wuthering Heights.
Harriet: My favourite book is a feminist kind of sci-fi book. It’s from the perspective of this woman and basically people can’t give birth anymore. It’s so good.
Bev: Hunger Games.
Nadia: I’m in the middle of reading Russell Brand’s biography at the moment.
Harriet: We love Russell Brand.
Nadia: Yeah. We wanna meet Russell Brand.

Who’s your favourite Spice Girl?
Nadia: Baby!
Harriet: I like Mel C.
Bev: So do I.

How did you get the idea for your name?
Nadia: It was just a joke. We played a gig at school called ‘Rock for Charity’ and we didn’t have a name. And our teacher was like “Girls, what are you gonna call your band? The gig’s coming up soon!” So I said “The Tuts!” She wrote it down and walked off and I was like “No, it’s a joke!” and she said “No, I like it!”. I love the name. I’ve always loved it.
Nadia: We love Germany, by the way. Germany’s the best, we’re coming back to Germany. The fans are the best.
Bev: Yeah, last night (Berlin) was amazing.
Nadia: Last night was our best gig so far.

Thanks ladies for the great interview!
As well big thank you for getting me on stage to sing ‘I call you up’ with you, was so much fun! 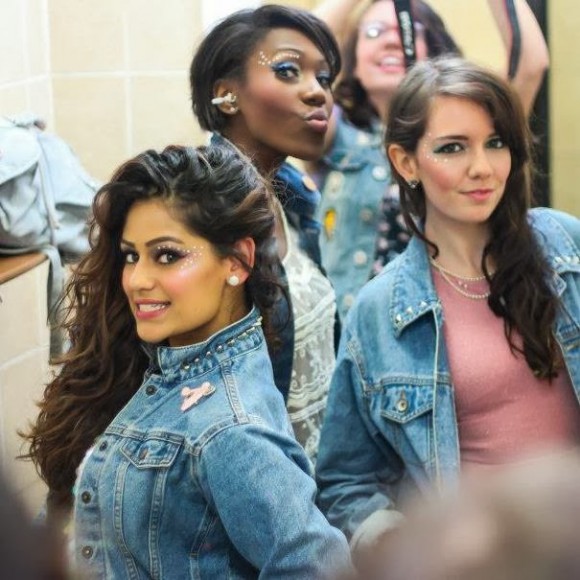