DREAM NAILS – four punk witches from London, described as “The Ramones meets Bikini Kill”. We met them at Handmade Festival in Leicester a few months ago & they took our disposable camera with them on tour! To get to know them we asked them a few questions as well…

You describe yourself as a feminist punk band. What does feminism mean to you and how are you trying to include it in your shows?
Janey: Feminism is a lifelong commitment to listening, learning, and changing structural oppression. This is why we work with venues to make sure they have safe spaces agreements and gender neutral toilets. We’ve cancelled shows before where the venues have been dismissive of our concerns. The safety of our female and genderqueer fans is a very basic ask, and if a booker can’t get that right, it’s game over.
Mimi: We definitely include it in our shows but also in what we release. We released a vinyl and zine with all of the proceeds going to Abortion Support Network, which helps women from Ireland and Northern Ireland come to the UK to get safe and legal abortions. Feminism should be intersectional, and we try and apply that to every aspect of what we do. That’s why when we put on shows we always have unwaged tickets available, accessible venues, gender neutral toilets, and book artists we love who are people of colour or queer artists.
Lucy: Being a feminist band means actively putting intersectional feminist principles at the forefront of all our actions. This includes insisting on diverse lineups and passing up on shows where this isn’t respected. It means making a commitment to lifelong learning – our zine on reproductive justice featuring contributions on reproductive issues that go beyond abortion is an example of this. It means contributing to workshops and panels, sharing gear and knowledge where we can – skill-sharing is a feminist act of solidarity we take very seriously.
Anya: We just co-organised this big clubnight with another band Charmpit called Queer Prom – it’s basically the prom we never had. Frothy dresses, tuxes and loads of queer babes. This time we centred trans artists and made all profits go to Action for Trans Health. It’s important to raise awareness of trans issues and showing solidarity while all this bullshit is going on in the UK concerning the Gender Recognition Act, and TERFS recently trying to take over London Pride march. 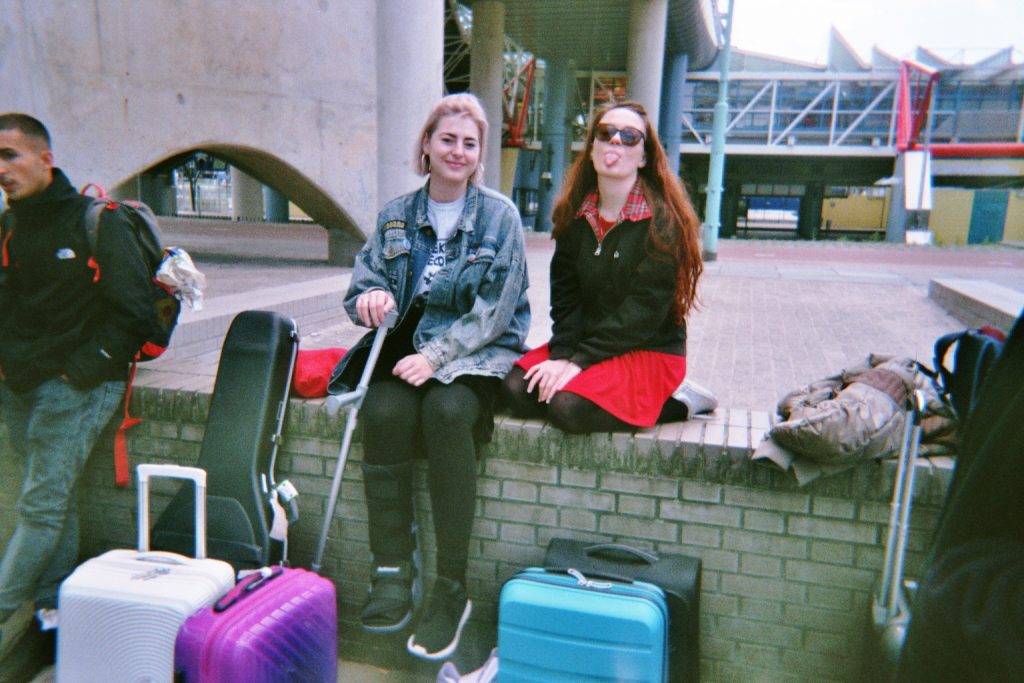 Here’s Mimi and Janey waiting for our bus to take us to Amsterdam. We don’t actually have our own amps and stuff, so when we travel around Europe we only take our guitars and cymbals and then borrow the rest from local bands. This is great because we can get cheap Flixbuses!!

I know you do a cool thing at every show – GIRLS TO THE FRONT – can you tell us a bit about that? I bet there are always one or two angry men that complain?
Janey: At every show, our call for “women and nonbinary people to the front” is a social exercise in men’s willingness to take leadership from women, and to challenge their own entitlement around taking up space. At 90% of our shows it’s not a problem, but there have been times where had to stop playing and put down our instruments at some shows until they listen. It can get very tense but it’s 100% worth it for all the bouncing happy women and nonbinary people at the front! Men’s resistance to this rule at a feminist punk show is so weird: it proves our point about their entitlement perfectly.
Mimi: One time we were playing at this anarchist squat in Oslo, and a few men refused to move and were slam-dancing around all of these women. At one point one of them tried to grab my leg while I was onstage, I had to kick him in the head to get him away! Drunk men at shows are literally big toddlers that will fight you if they don’t get what they want.
Lucy: Every time we request this, it’s so beautiful to see the women move to the front of the stage and take up their space; it’s as if they can’t believe they can do this and it rarely happens naturally. Watching a joyful little community form every show is one of my favourite parts of playing shows. 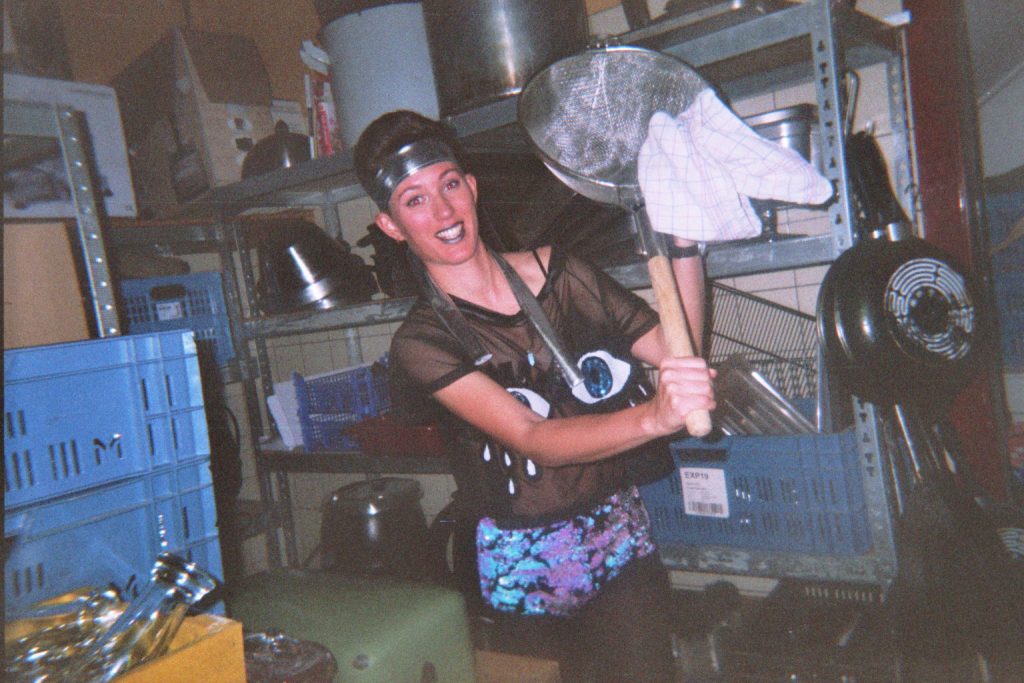 Rotterdam
Before every show, we have a pre-show hype together!! This time it got a bit out of control in the kitchen at the venue and we were playing a game where we threw the tea towel at Anya and she had to try and catch it in this massive sieve.

If you had to describe each member in the band with one word, which word would define them?
Janey: Ok so shall we define each other??
Mimi: Janey your word has to be “twiddle” now
Anya: Janey’s “twiddle” after a woman doing VFX on our new video needed to give her a nickname while she was editing. Had no idea of her real name. Lucy was ‘Green’ and Mimi was ‘Sequins’. She knew me so I was safe. However I do get called Gronya Person a lot; my straight alter ego.
Lucy: I’ve recently come to be called ‘crusty’ a lot. It’s only because I like caribinas though. Who doesn’t? They’re incredibly useful.

What’s the funniest or weirdest thing to happen to you at a gig?
Janey: Omg where to start? Let’s do one each. For me, our funniest show was when we were on tour with Petrol Girls and playing a show in the Black Forest. We all gave each other dares to do, and mine was saying “AWW YEAAAAH” into the mic every time Anya did a guitar solo.
Anya: Best moment of my life.
Mimi: Hahaha I forgot about that! And lucy had “I <3 trees” written on her face. I think my favourite thing was in Stockholm when Anya’s Amp stopped working, so the rest of us improvised a song called “electricity is not our friend” for a while until the amp was sorted out. Everyone loved it!
Anya: I reckon the funniest thing was at gig in Brighton when Janey did a call out in the audience for people we could prank call on the way home. We called people’s old bosses and exes and just ate crisps really loudly over phone without saying anything. That was in Brighton. Pissed myself.
Lucy: When we were in Oslo, we played in squat in which goths were practicing ‘human suspension’ (aka hanging off the celing on meat hooks, dangling in swings made of their own skin) during our soundcheck. Strangest moment of my life. 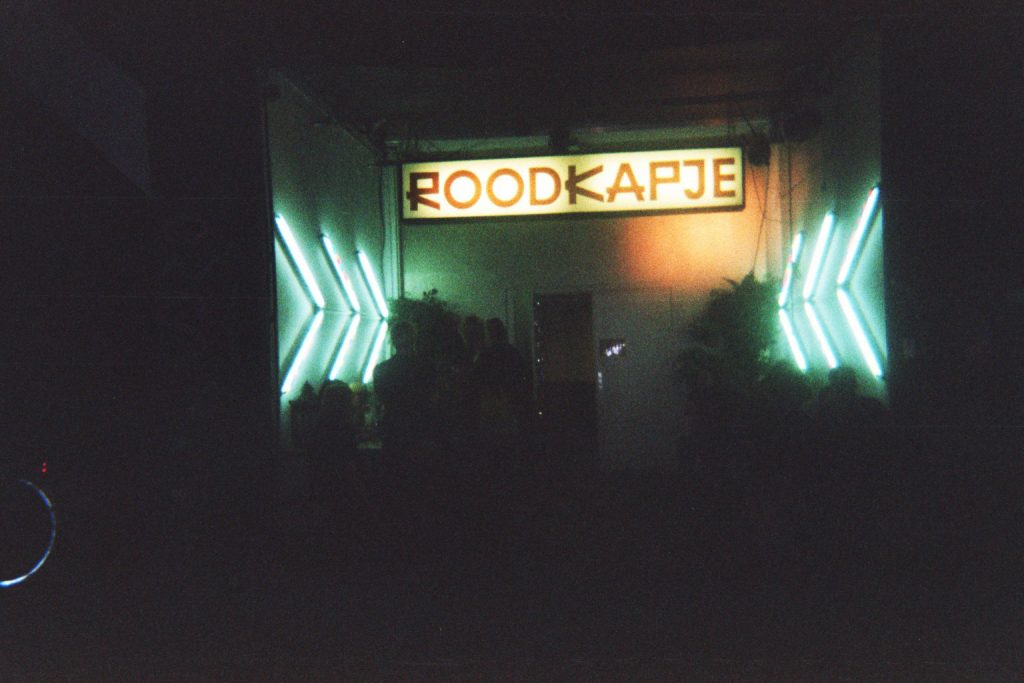 Roodkapje is an installation, cafe and gig space in Rotterdam. It was cool! We got interviewed in the outside area for someone’s thesis paper on feminist communication in the digital age. We wouldn’t be where we are now if it wasn’t for the internet.

What’s your biggest dream to achieve with your band?
Janey: I just want safe spaces at shows to become the norm. For promoters, venues and festivals to unquestioningly prioritise the safety of women, queer people and trans and genderqueer people, it would mark a huge cultural shift that’s worth a million times more than any band’s individual success. I want Dream Nails to pave the way for a generation of young, queer women from all backgrounds and identities to go out to shows and feel safe and free and not at risk of groping, assault or any kind of harassment.
Mimi: My dream is to be able to release our first album, and hopefully inspire babes around the world to take action, and feel validated and confident.
Lucy: I want people to leave our shows adamant about the fact that they need to start their own band IMMEDIATELY, and feel empowered enough to do it.
Anya: I share these beautiful dreams and I’d also love to tour America because I know our music would get such an amazing reception there.

Do you have anything coming up / any releases / tours happening soon?
Janey: Yes! We have a really busy summer of touring! Follow our adventures on Instagram.
Mimi: We’ve just got these brand new witchy “Hex the Patriarchy” tote bags in our bandcamp store! The first load sold out in three days so we’ve got more in stock!
Lucy: We are squirreling away sweet songs for our album we hope to give birth to later in the year.
Anya: We’re on our way to Rebellion Fest, Boomtown and Shambala festival in the UK in a week or so, and already booking some exciting European tours for 2019 and we’re sure to come back to Germany. We travel primarily with the purpose of reviewing fries for our YouTube series Chip Advisor. Come see us, show us where the good fries are, and hang out! 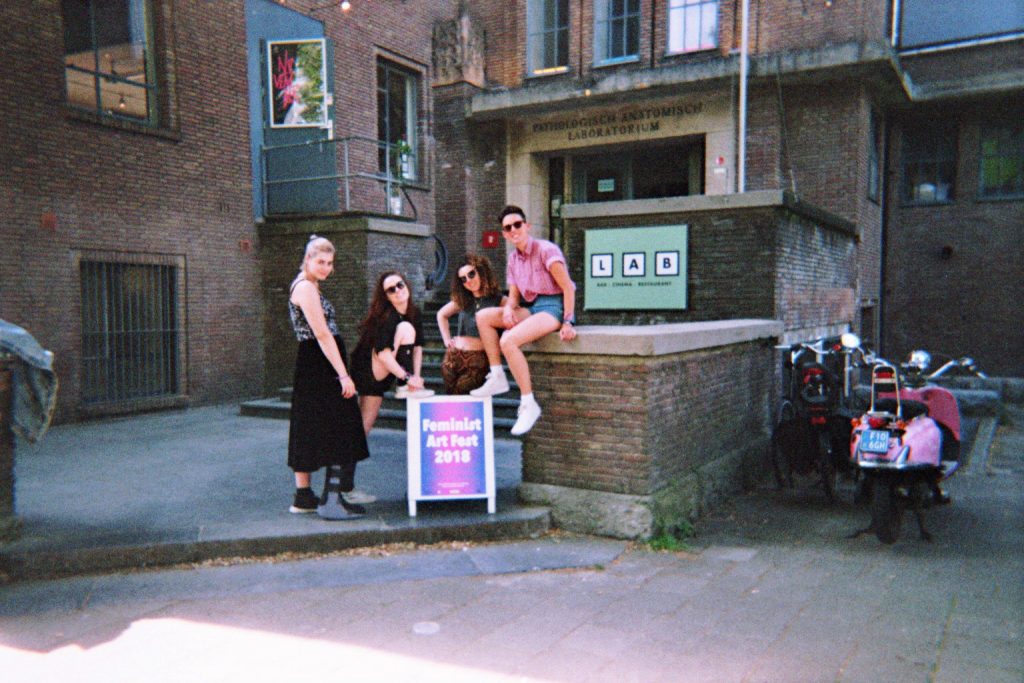 Amsterdam feminist festival! A chunk of women in the audience walked out after we made a trans solidarity statement and said “not all women have vaginas”. Bye. 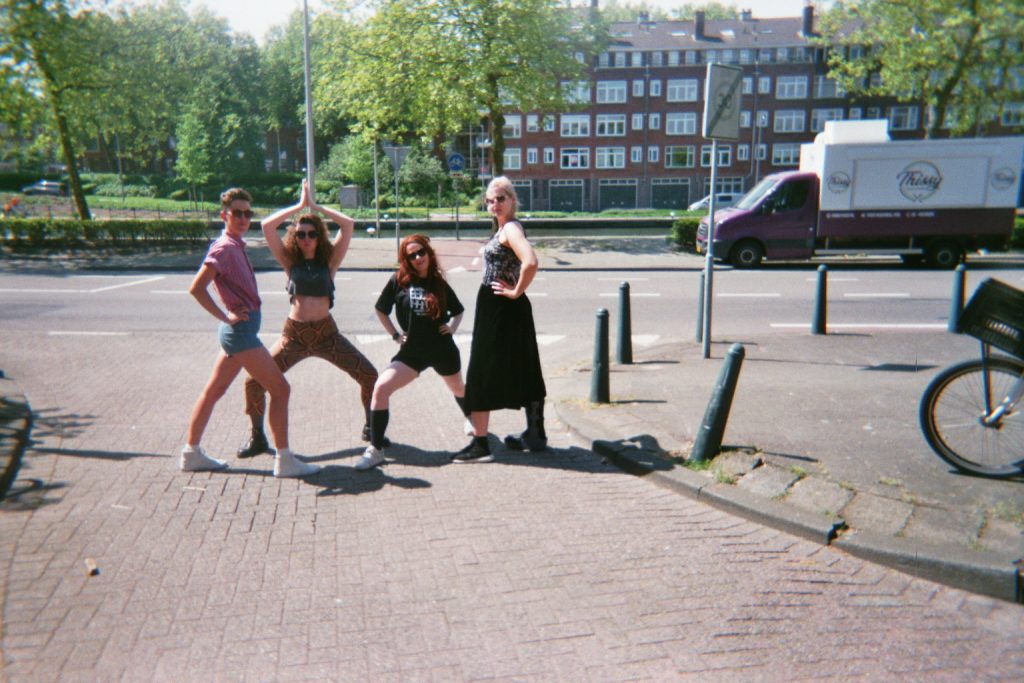 Rotterdam
Here we’ve just stocked up on snacks from Albert Heijn and are stretching in the sun before our journey to Amsterdam!! 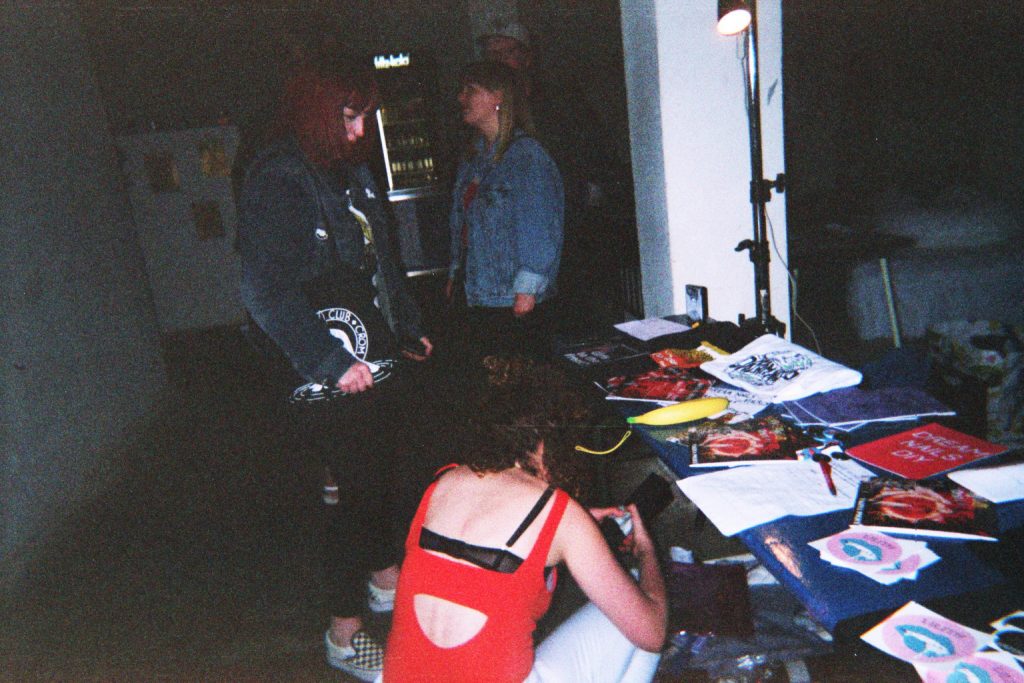 Hustling merch. This is how we fund our tours and recordings. Anya loves petty cash; see the frightening glint in her eye as she offers you a t-shirt or a patch. 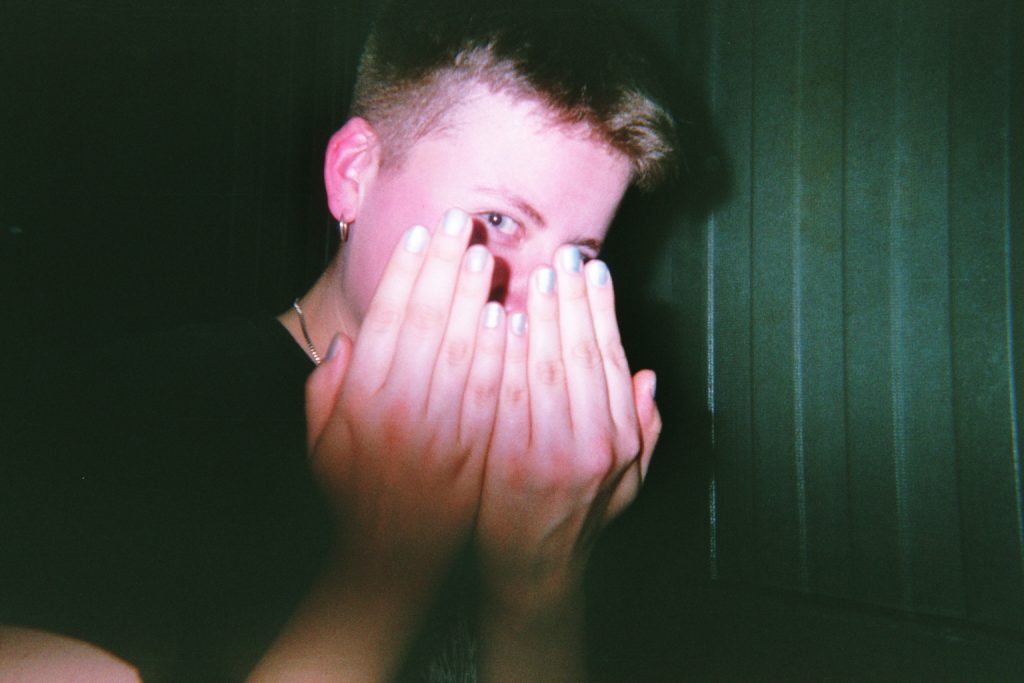 Alex, our number 1 fan. We stayed with them a year ago when we toured with Cherry Glazerr and every time we’re in the Netherlands, we hang out! One of the most amazing things about touring is discovering the best people through the international queer feminist network. 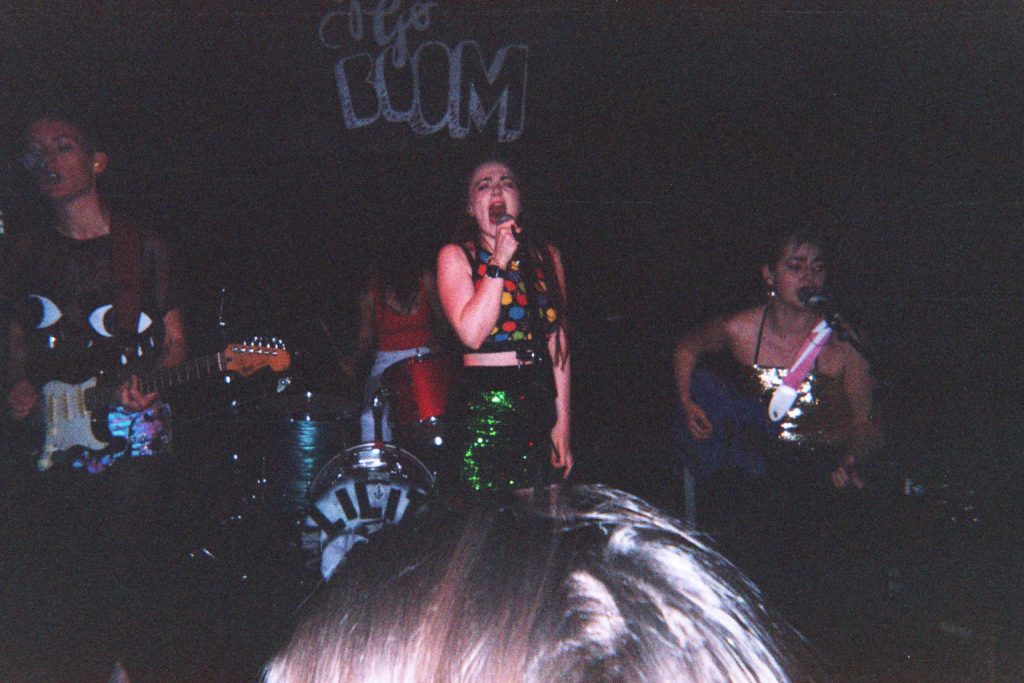 Right before this show, Anya and Mimi ran a guitar skillshare session with a big group of women. Skillsharing is an important part of community-building and it’s really important to us. If you’re wondering why Mimi’s sitting down onstage, it’s because fractured her foot and sit for all of the gigs around this time! 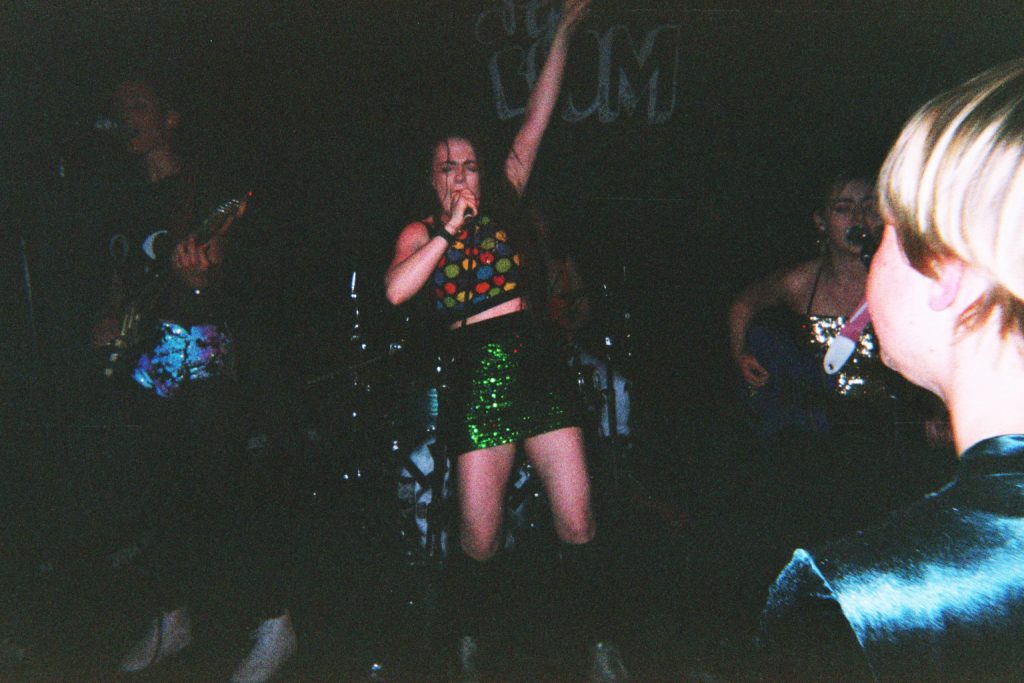 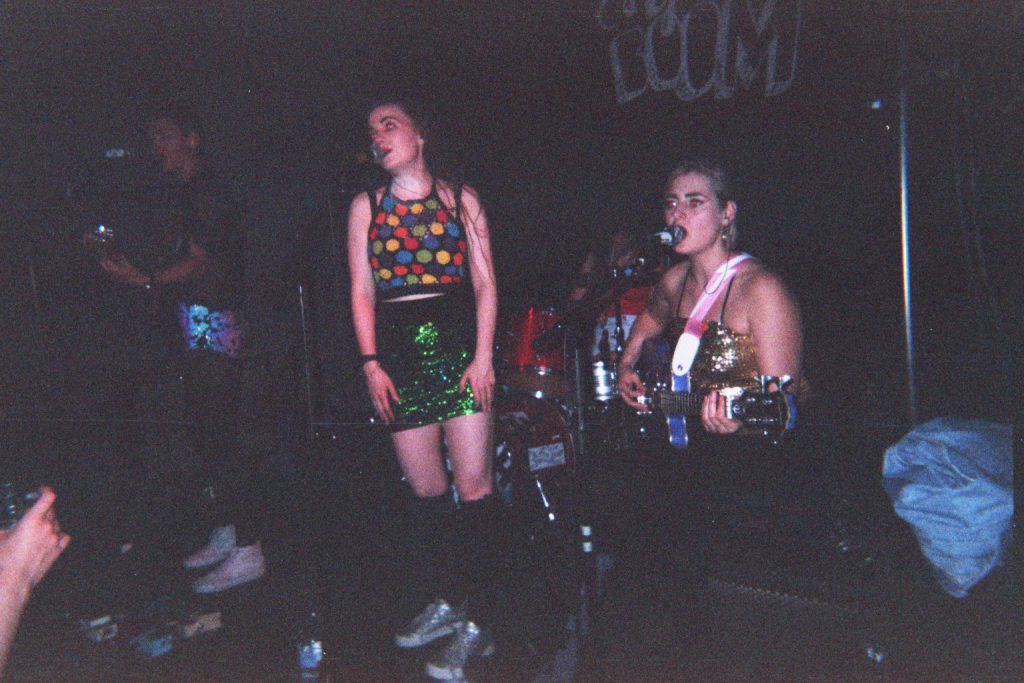 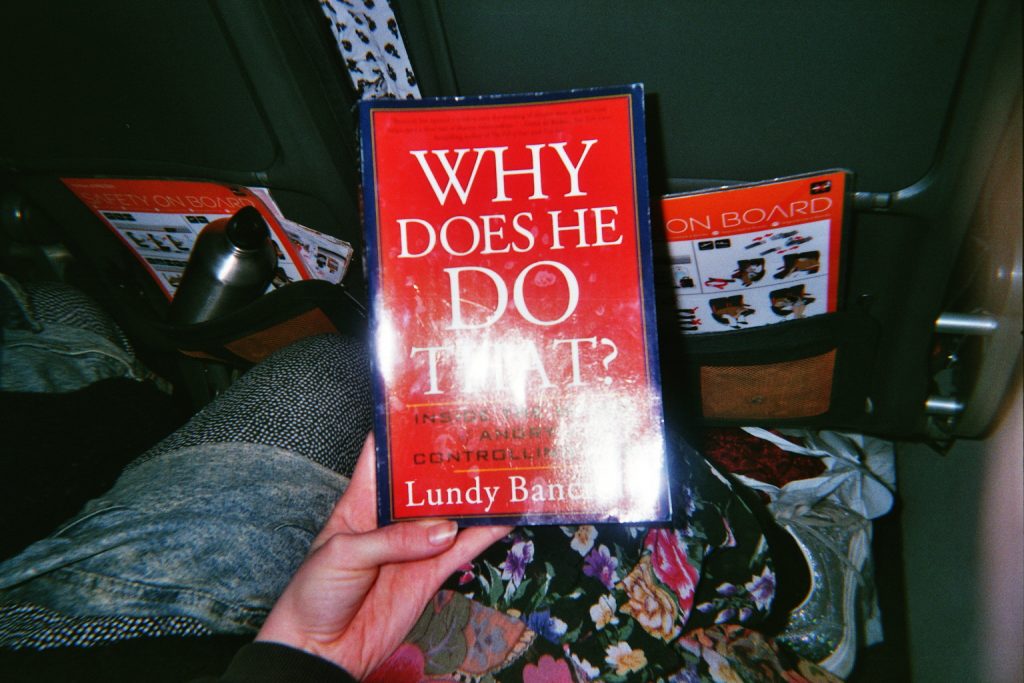 Janey’s reading a book about male entitlement and how the masculine drive for power and control are the foundations of all gender-based violence. Interrupting male entitlement is the key to feminist liberation, and the best example of how we do that is with our “women and nonbinary people to the front” rule at shows. 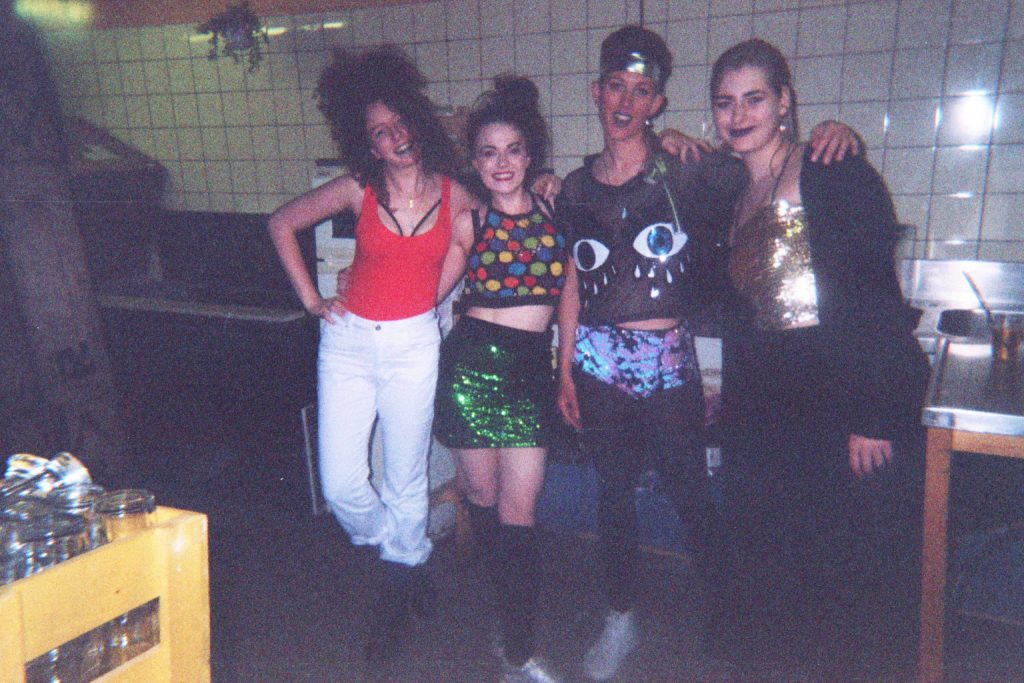 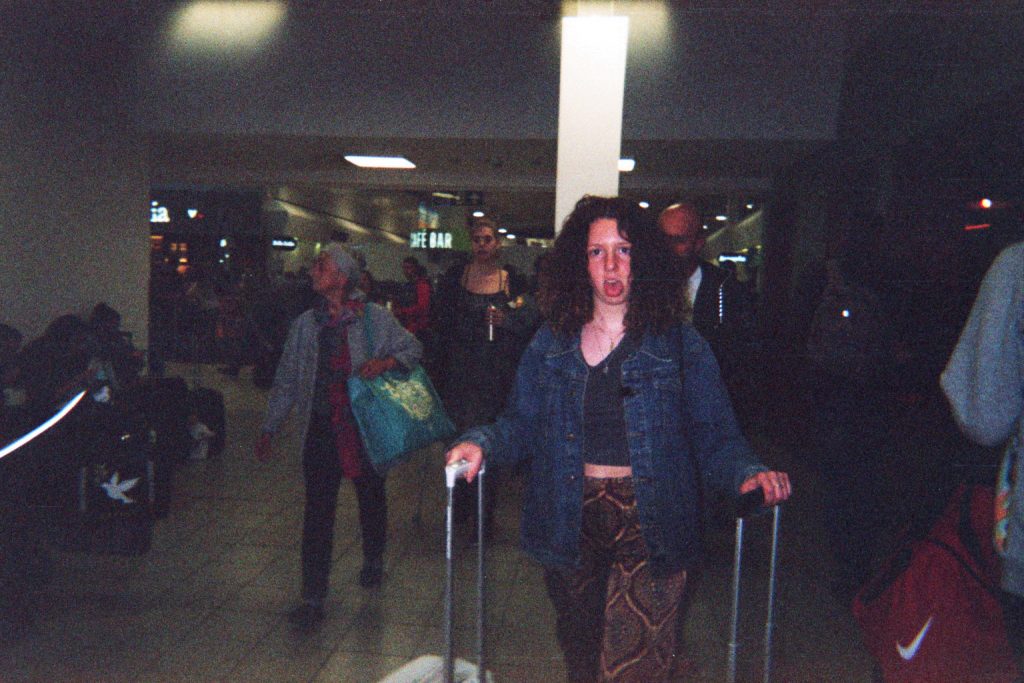 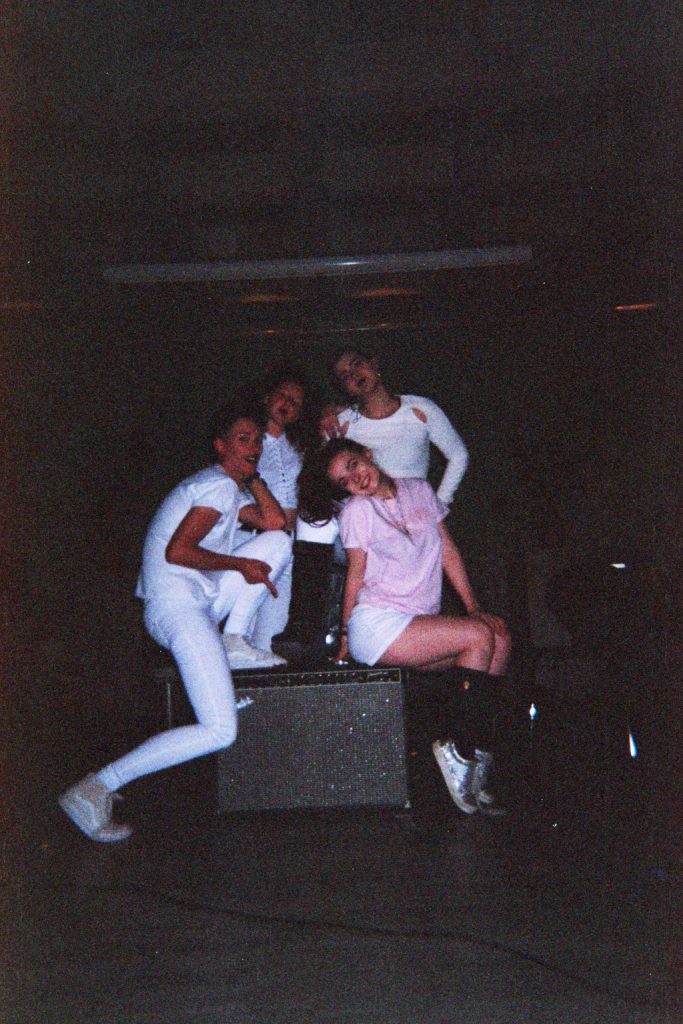 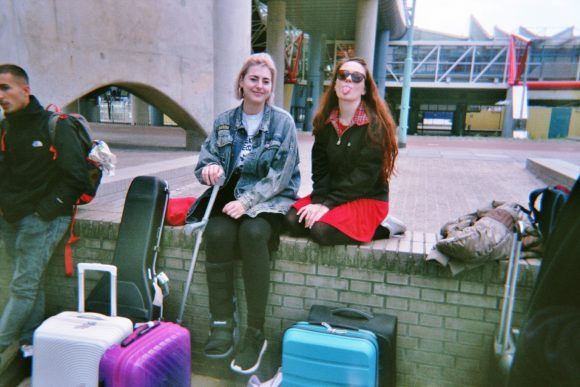