We got to hang with The Amazons before their amazing performance at the Puls Festival 2017. Check out the interview to find out what the four lads had to say about their debut album and the Mona Lisa, the Beatles and why Sam Smith caused the inflation of avocados.

A lot of stuff has happened since the last time we talked in 2014. So what has been your highlight this year?
All: Putting an album out! For sure. That was all we’ve been waiting for.
Matt: Yeah, putting an album out was pretty good and going to cool places for the first time like the States and Japan – just four boys from Reading going out and seeing the world was a really big deal.
Elliot: It’s been a good couple of years.

Let’s talk a bit about the debut album – do you have a personal favourite track on it?
Matt: It changes all the time, cause we’re kinda sick of this album now, haha. We’ve been touring it for the last couple of years, so… it’s like being a painter painting your picture like: “Oh, that’s pretty good, I’ll show it to people!” and then looking at it every fucking day. Would you like the Mona Lisa if you looked at it every day? You’d be like: “Oh, the Mona Lisa’s sick.” and then you’d be like: “Ugh… it’s alright.”
Joe: I’d get pretty sick of the eyes following me around.
Matt: If you look at it all the time, you’d think: “Ah, I need to change that…”. That’s what we feel like.
Elliot: Are you comparing our album to the Mona Lisa? (everyone laughs)
Matt: No. It was like an analogy.
Chris: But what’s our favourite song?
Matt: “Holy Roller” was actually quite fun to play at the headline shows, but it’s not necessarily the best one on the album.
Chris: “Junk Food Forever” is like our anthem. It’s the one everyone sings back to us at the shows. After we got off stage at Reading Festival, people were still singing that.
Joe: We’re finding ways to keep ourselves entertained now by extending songs and changing bits just in a live capacity – that’s quite exciting.

Were you surprised how well the album actually did?
Matt: Kinda yeah, it was a bit of a surprise. I mean we wanted to be like top 40 in the UK, and to be just up there mixing it with the big ones in the top 10 was cool.
Elliot: Between Drake and Little Mix… We’ll take it.
Joe: Yeah, we’ll take it. But we want more, we want better next time.
Matt: The door that opens, a lot more opportunities – that’s what the top 10 actually means.

You’ve all been in bands before. Are there any mistakes you’ve made in those years that you know now how to avoid?
Joe: Pretty much the whole process of this band was to try not to make all of the mistakes we made in previous bands. This time it wasn’t about e-mailing people about our music, it was literally about creating something in our hometown, in Reading and keeping it very local – until it took us outside of Reading. That was our goal and it was the only goal – to get people through the door in our local town.
Matt: “Don’t listen to other people, don’t listen to people outside the band.” was an important thing we learned and took away from our past experiences. It’s kind of your band against the world. That’s how we feel. Cause no one really knows what’s best for the band, except the band members. Have faith in your own judgement and be decisive.
Joe: We felt as well that if we were excited about the music we were creating, hopefully that would be infectious to other people.
Matt: There’s not much more you can do, else you’re just gonna go crazy and make something that isn’t sincere. It’s not really about looking for success, it’s more about making your art and success finding you in a way. That’s not to say we aren’t touring and going out there for a reason. We want to connect with as many people as possible, but the place where it comes from – whether it’s recording an album, doing music videos, going on tour… The place where it all comes from needs to be sincere and real. Thinking about money doesn’t really help the process. 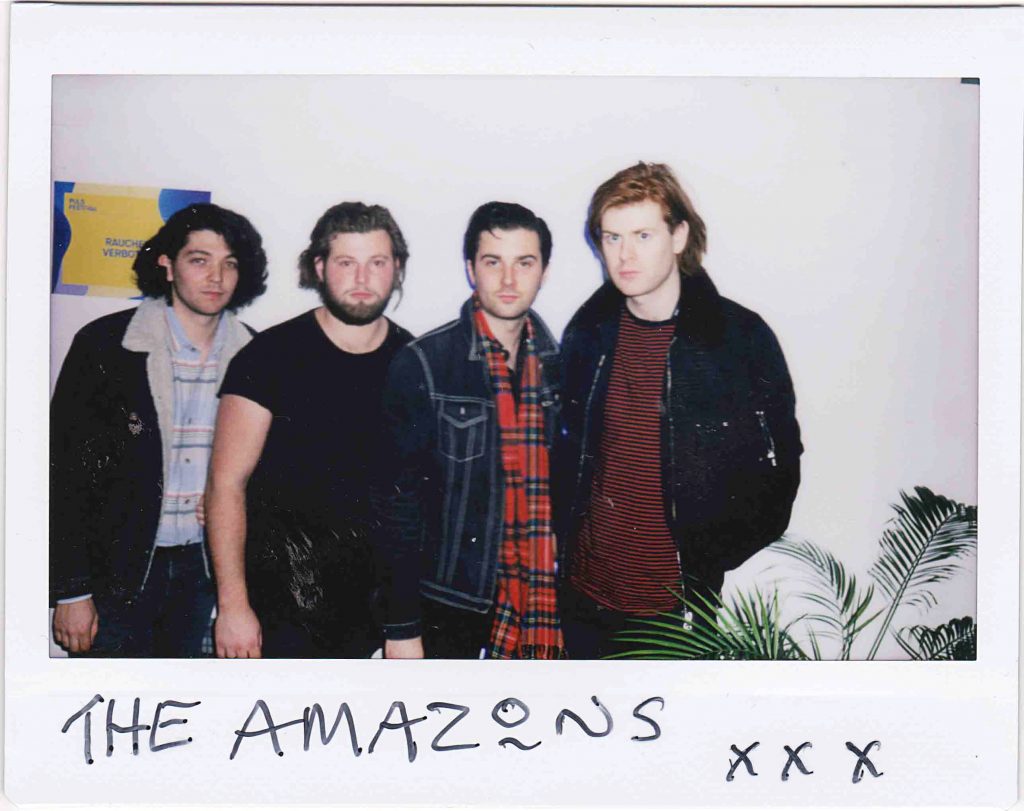 The Amazons by Lisa Lovegood, © indie.vidualist

You’ve been on tour quite a lot and, being on the road together for such a long time, you’ve learned a lot about each other. Are there any annoying habits you have noticed about one another?
Matt: Haha, oh wow do we really dive into this… this could turn into therapy.
Joe: We love each other very much. There’s nothing wrong with anyone.
Matt: Being in a band is just different to just being normal mates. Normal mates ask you to meet up. That doesn’t really happen with us cause we’re together all of the time anyway. And there’s this shared experience about being in a band that bonds you in a different way than just normal friends. Being in a band is not something that you can talk to your friends about and they would truly understand it, so yeah, it’s an interesting relationship.
Joe: Everyone annoys each other in lots of different ways.
Matt: But like your siblings annoy you or something like that.

Being from England – what British clichés do you guys totally represent?
Elliot: We love tea.
All: Oh yeah, tea!
Joe: What are English clichés? Like Hugh Grant?

Tea would be the first one…
All: Tea. Of course.
Joe: Tea is a good one. We drink a lot of tea.

Being very polite… but we’ve known you guys for quite a while and know you truly are nice & polite.
All: Awww!
Joe: We’ve got quite a Southern accent… which I guess people would say is a typical thing?
Matt: We’re from the Royal county of Berkshire and that’s the only Royal county in all of the United Kingdom.
Elliot: Effectivly that makes us like… nobel birth…
Matt: Keep on dreamin’ man.
Elliot: The queen… yeah we know the queen pretty well. We’re going for sunday lunch every day.
Chris: Also… we all got really bad teeth. (laughter)

Harry Potter or Star Wars?
Elliot, Joe & Chris: Star Wars.
Elliot: I know more about Harry Potter than Star Wars, but still Star Wars.
Matt: Harry Potter, but only the books. Not films. I love Harry Potter, but I love the books. The films… the Weasley house changes every film!
Joe: Hagrid’s house – it’s all over the place! And the house itself looks different.
Matt: The Fred and George characters in the books are so vibrant and so amazing – there’s a whole chapter on their shop. It’s sick, there’s just so much more stuff in the books.

Which Hogwarts house would you sort yourself into?
All: We’ve already done the test!
Elliot: I got Slytherin.
Joe: Ravenclaw.
Matt: Ravenclaw is pretty cool.
Chris: I’m Gryffindor.
Joe: (looks at Matt) What are you? Cause you’re not a Gryffindor?
Matt: I got Hufflepuff! (makes sobbing noises)
Joe: We got one of each!

Who’s your favourite Beatle?
Joe: It’s gotta be Lennon for me.
Elliot: I don’t know. I don’t really have a favourite. I’ve never really thought about it too much. I always liked Paul cause he played bass, so I’m gonna say Paul.
Matt: I like George. I like Ringo. I like Paul and I like John. (laughter) No one likes Ringo the most. You can’t. There’s nothing to like, haha! No, I mean there are no qualities that bring him to the top.
Chris: But his personality!
Elliot: Have you seen the clip of Keith Moon and Ringo Starr where they drunk shitloads of red wine and they’re really pissed and doing an interview and they just talk complete and utter bullshit?
Matt: I’m so torn between Lennon and McCartney.
Joe: I’m gonna go with McCartney.
Matt: Lennon is a complex character. Would have been really interesting to see what would have happened if he didn’t die unfortunately… He had some wicked music. For me Paul McCartney’s songs are like standards – they’re like part of the culture. From “Let it be” to “Yesterday”. I think they are the best songs ever. So I’ll go with that. Even though he’s incredibly uncool. Sometimes. And sometimes he’s alright. Wings were cool as well! He had some bangers. He had more time than Lennon. And “Mull of Kintyre” is the best song of all times.
Joe: He has a weird obsession with that song.
Matt: (starts singing Mull of Kintyre)
Joe: Ssssshhhh…
Elliot: Please, carry on!
All: Next question!

What has been your favourite record that was released this year?
Elliot: I’m gonna say Lorde “Melodrama”.
All: YES!
Elliot: And maybe SZA “Ctrl”.
Matt: Everyone loves Queens of the Stone Age.
Joe: Liam Gallagher’s album is good. “As you were”. Full of bangers. And I also really like Beck’s new album.
Chris: The Manchester Orchestra album “A Black Mile to the Surface” is actually sick.
Matt & Joe: Ryan Adams. “Prisoner”.
Matt: Royal Blood. “How did we get so dark”. Underrated.
Matt: London Grammar. That’s at the end of my list, but still on the list. It’s in my top 6.
Chris: Gonna throw in a curveball… Baxter Dury. “Prince of tears”.

What’s the most underrated artist or band at the time?
Joe: I think Flyte are quite underrated. From the UK. They’ve got really good songs.
Matt: Their vocals are amazing. I’d probably put my money on them.

If you could live inside a series or a TV show for a week – which one would you choose?
Matt: “Always sunny in Philadelphia”.
All: (laughing)
Elliot: “Breaking Bad”.
Matt: “Game of Thrones”. Get a couple of swords and try not to die.
Matt: Oh, dude! “Rick and Morty”!
Joe: That’d be sick!
(banter about “Rick and Morty” episodes)
Chris: We could do the episode when they have to write a song to save the world.
Elliot: Everyone would die. Haha!

So last but not least – what are your plans for the new year?
Joe: Get fit.
Matt: Get fit.
Chris: Get fit. Get healthy.
Elliot: Get fit. Go on an avocado diet.
Matt: Sam Smith did an avocado diet.
Joe: Just avocados?
Matt: Just avocados.
Elliot: The price of avocados has gone up. Inflation. Beyond the rate of inflation as well.
Chris: We were in L.A. a few months ago and we went to a place to get avocado toast – like you do – and on the menu there was this sign next to it that said “due to the price inflation of avocados we can’t afford to sell this atm”. So we couldn’t have it, haha!

And plans that don’t include avocados?
Joe: We’ll be doing a tour in February in the UK… we will be doing some festivals in the UK in the summer…
Matt: We’re going to Japan and Korea in march. And… we might release some music. Might. What else do bands do? Joe is gonna be carrying on with his blog about horseracing…
Joe: Oh really am I?
Matt: Joe, I’m thinking of interesting things we do outside of the band. Chris and Joe do cool DJ stuff. Sometimes I fill in for Joe, or Elliot. But Chris is the main DJ guy.
Elliot: We just stand around and get pissed.
Joe: Hey! I know what I’m doing!
Matt: Yeah they’re doing a string of DJ sets in January, but that’s under wraps. That’s an exclusive!
Chris: I’ll go home and just go lie in a coffin.
Joe: And open up when it’s time to tour! 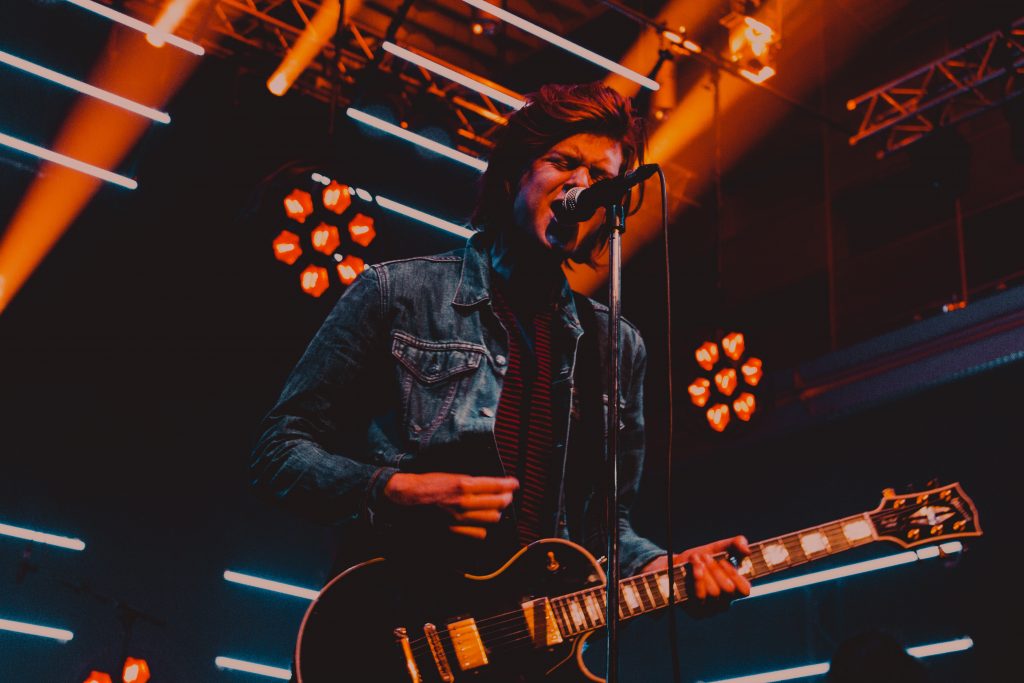 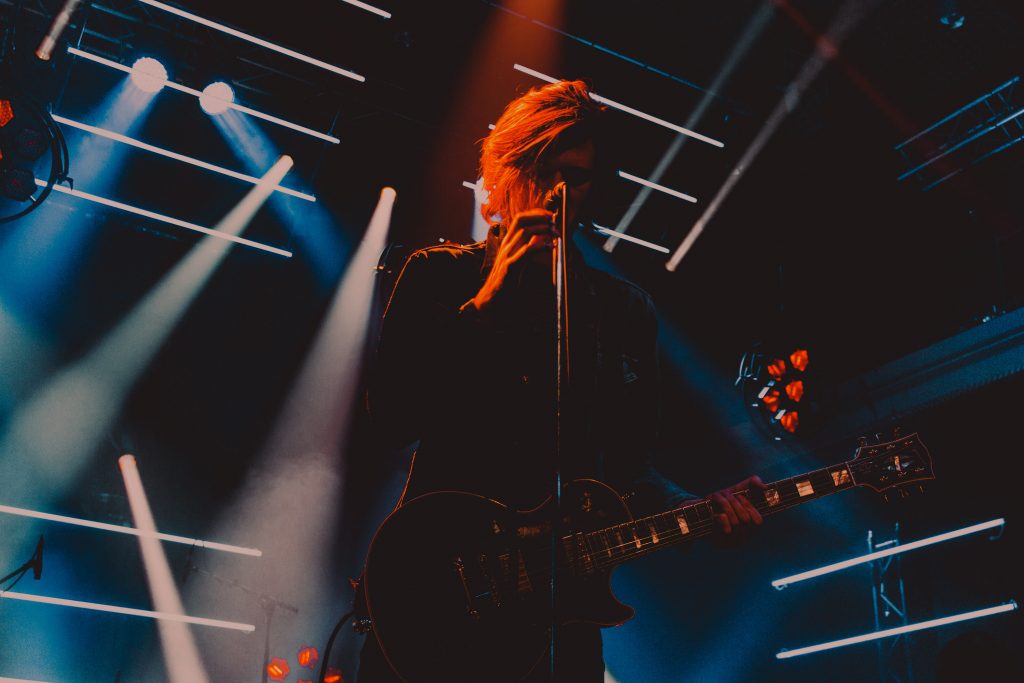 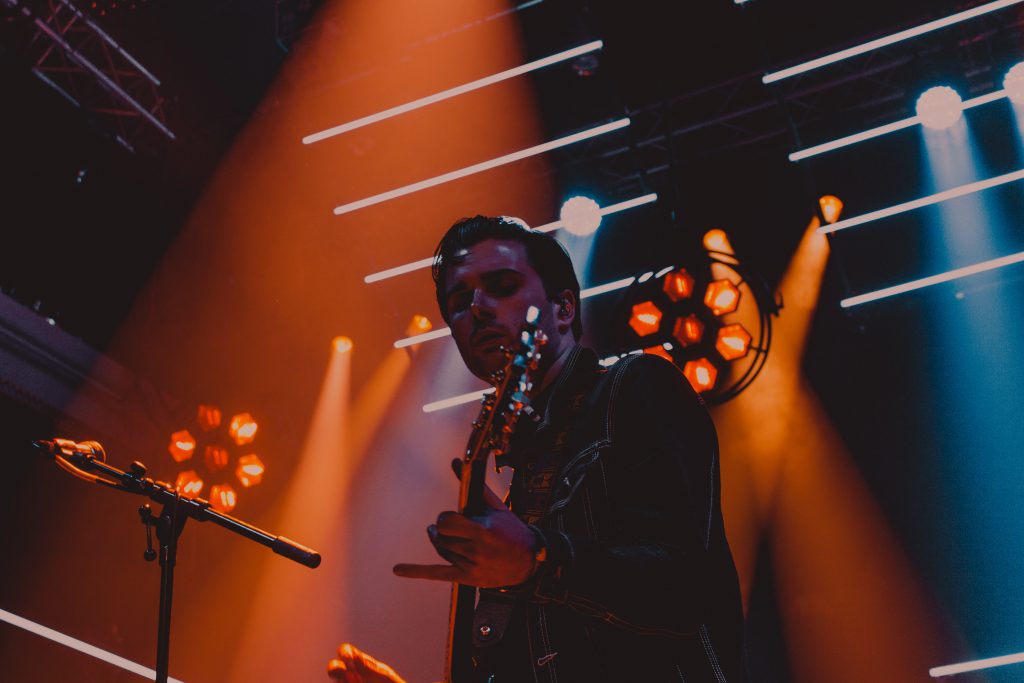 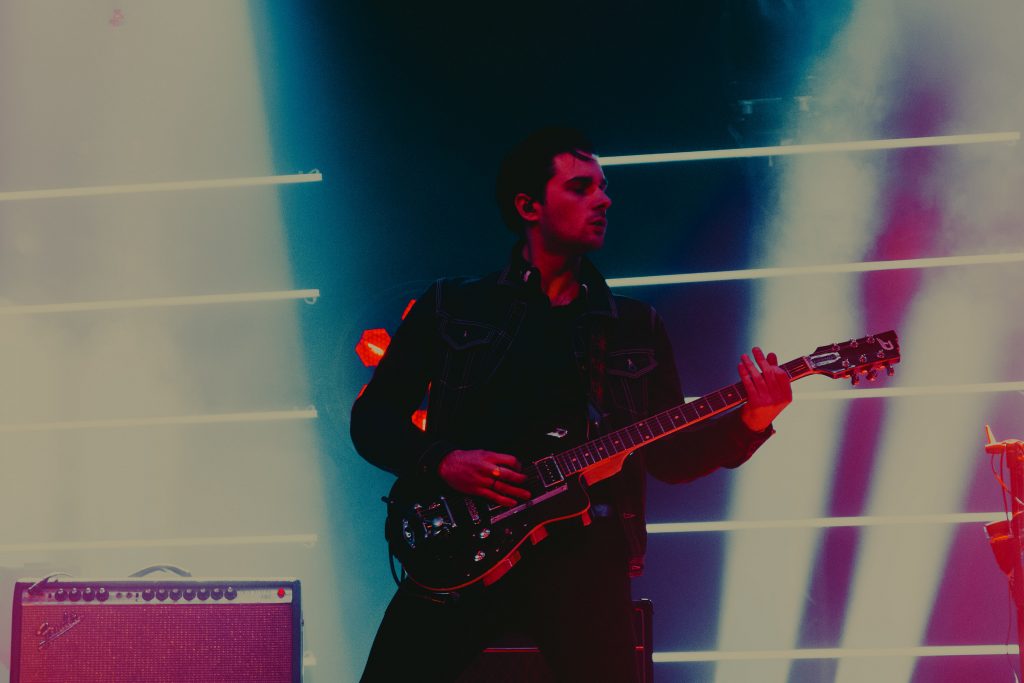 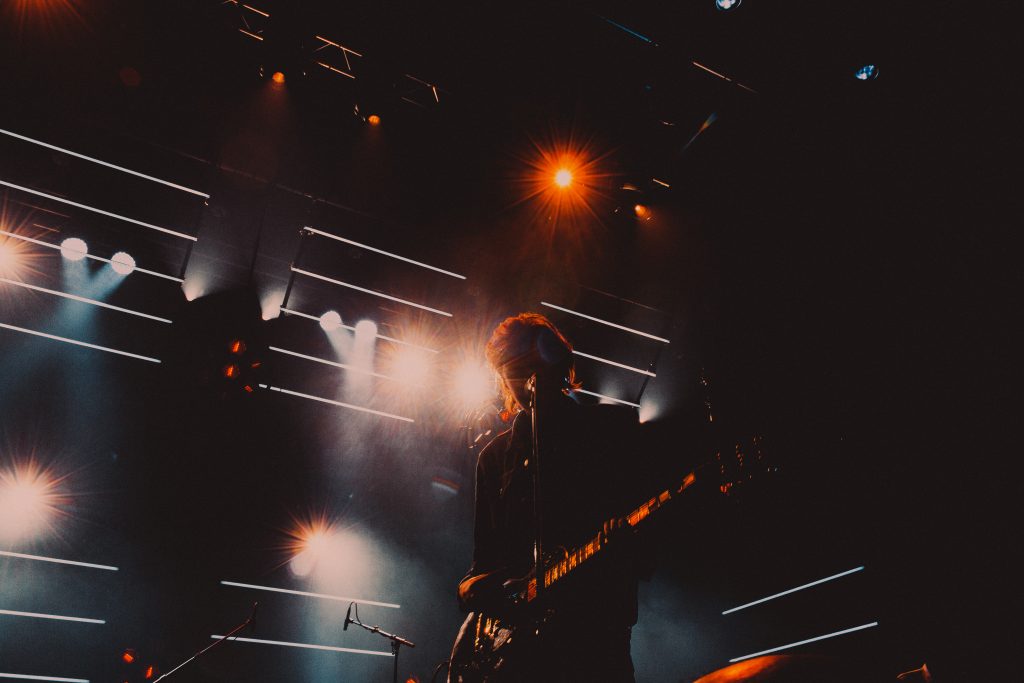 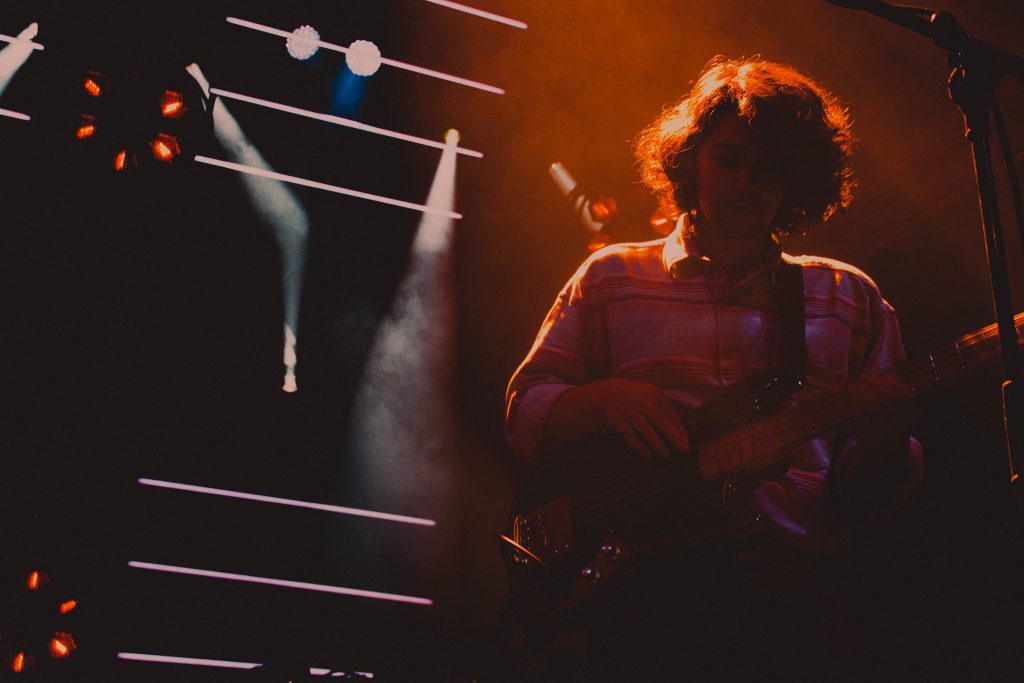 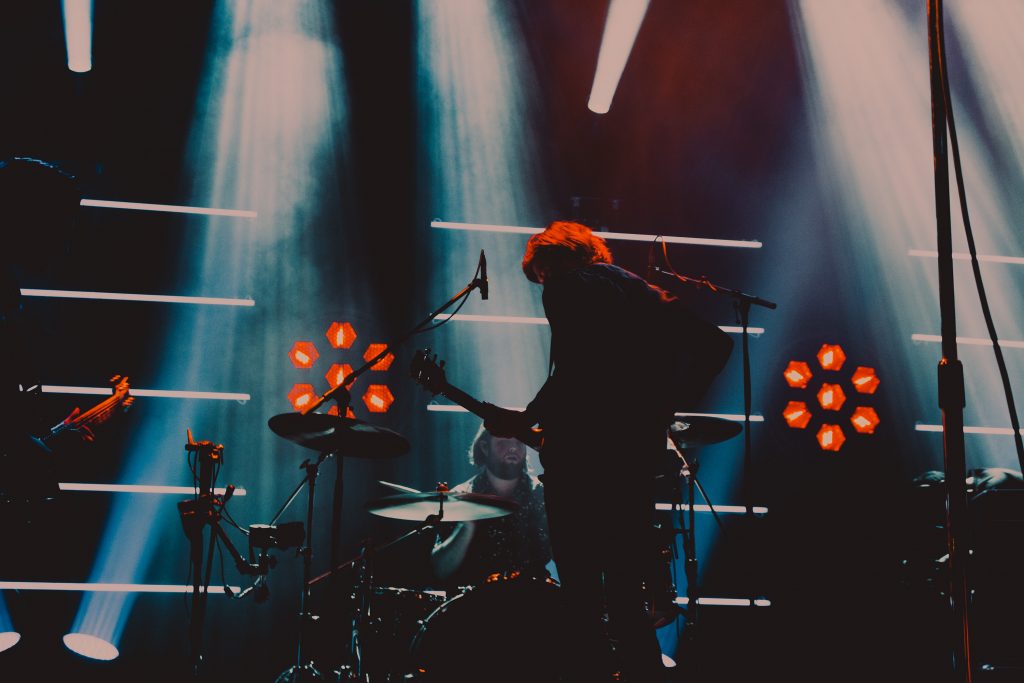 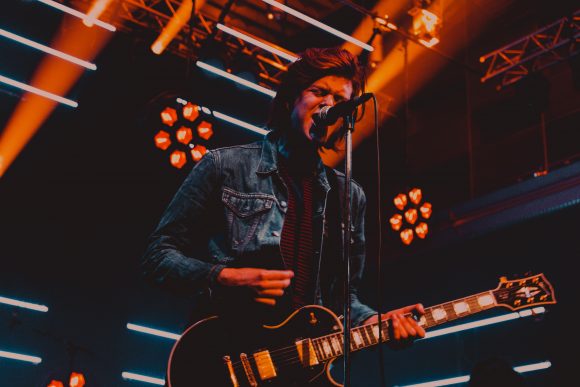