Last weekend I went to the BR Night of music in Munich. Five artists were playing the BMW Lounge, all five of them from very different genres. Classic, Opera, Rock, Pop and… SEA + AIR! Every band played 3 times, of which two were quite small sets including about 3 songs each. And at the end a longer set, around 45 minutes.
It was a long night, but a bloody good one.
My personal highlight were definitely SEA+AIR, so we decided to tell you a bit about their album ‘My heart’s sick chord’…

SEA + AIR are a self-described new age duo from Greece and Germany. Their music is a heavenly mix of rock, instrumental, and world music. “Take Me for a Ride” is the first track on their debut album My Heart’s Sick Chord, and the song does exactly that. This song is hauntingly alluring, calm but complex, beautiful but heartbreaking. You almost wish the ride wouldn’t stop, your ears linger on every last note, begging for more. It’s the perfect first song for their first album. This music is definitely new age, but at the same time, it is fascinatingly old-fashioned. There is a certain degree of gentleness that seeps out of this album, making each song feel like a much-needed embrace. The following song is titled “Mercy Street”.
The melodic and melancholic undertones of this song are balanced nicely by the accompanying, uplifting flow of instrumentals. “Dirty Love” exposes the rustic charm of co-vocalist Daniel Benjamin’s voice. The tune is dark and enchanting, evoking a lust that can only be quenched by hitting repeat as soon as it hits its 3:09 minute mark. For the resilient ones who didn’t give in to that wanting, the following song, “The Sea After a Storm”, proves to be equally as captivating. “You Don’t Care About Me” is a lover’s ballad that anyone who has ever experienced love can relate with. The words divulge a deep, unrequited heartache. (I was dancing around my room at this point).
If the next track “Safe from Harm” doesn’t make a movie soundtrack, I will be shocked. Can Lord of the Rings be made again just to include this song? I think Frodo would be as comforted by this song as I was. “You and I”, the seventh track, is euphoric. The harmonious vocals and enamoring music are of talent comparable to Jeff Buckley. “Do Animals Cry?” is the loudest tune so far. Eleni’s vocal delicacy is put on display. “1st Life” is my interpretation of what Pink Floyd would’ve sounded like if they ever had a female vocalist, and it kind of makes me wish they did. Very mellow and enchanting vibes! “My Heart’s Sickest Chord”, deservedly the album’s longest track, is otherworldly, literally. If I ever go to space, this is the first thing I’d want to play. It is vulnerable, poignant, and the musical representation of a teardrop. The band ends the album with their arms and heart open, giving everything to those lucky enough to listen.

As for their live performances, they are chillingly sublime with the perfect amount of reservation. Eleni and Daniel have a supernatural chemistry that is evident in every piece of music they create together.
Go outside, preferably surrounded by trees, and listen to their music! 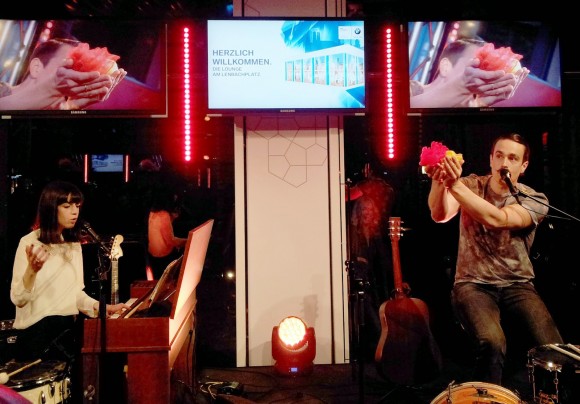